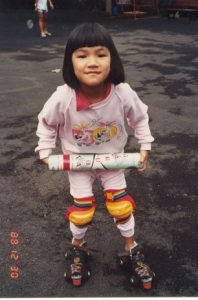 7yo with first pair of skates

“I grew up in Jakarta until I was 18. I have an older sister who’s six years older. It’s just the two of us. I was a very shy and quiet kid in school. I did my own thing and was an average student.

I started roller skating when I was seven. My parents had this strap-on metal clunky roller skates that they bought for my sister and I. By the time I was 12 it was the 90s, and inline skates became popular. I tried them on, and soon picked up roller hockey.

I first tried ice skating when I was 15. The first ice rink had opened in Jakarta, and my parents enrolled me for lessons. Soon, I became a figure skater, and was competing and doing shows as a child performer. Ice skates have very little friction with the ice, the blade is curved and you can turn easily, whereas on roller skates you have to lift two wheels as your feet are planted.

The 1998 riots in Jakarta got my parents thinking about my safety. My sister had moved to the US by then, and I was by myself. I was supposed to join her in the US, but I was too scared and shy, as I didn’t speak English well.

My ice skating coach was from Malaysia, so at the age of 18 I moved to Kuala Lumpur (KL). I studied there for two years, and did a few international competitions on Skate Asia.

Around 2000, I began to focus on other things. The course I was doing had a partnership in RMIT and I was encouraged to move to Melbourne to finish my final year after completing three years in KL. A lot of the kids in my course came to Melbourne and completed the course for a year, before going back home. 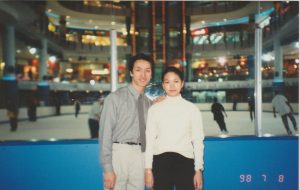 18yo – with my first ice skating coach, the one I followed to Malaysia

I’ve always been drawn to the Western culture. I didn’t like the culture I grew up in. Over here, it’s more open, honest, and we are allowed to express yourself. No one would go “Oooh look at her, wearing a sleeveless top!”

I fell in love with Melbourne and the parks as I like the cold. I stayed in a student accommodation in Carlton, hanging out with other students. When the one year was up, my dad would like to equip me with the best education and told me to pursue my Masters. I pursued my Masters in Animation and Interactive Media and graduated with high distinction. With the help of a friend I was able to secure my first job ever as a web designer.

Staying in Australia was not easy. I came as an overseas student, and did not qualify to become a permanent resident at the time. I was scrambling to find a way to obtain a visa to remain in Australia. Fortunately my employer at the time was able to sponsor me, and I obtained a four year temporary business visa. This was a life-saver for me. 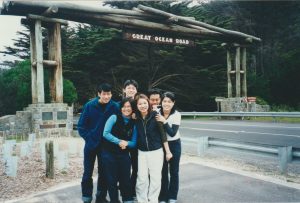 21yo – first month in Melbourne with international students

By the time my business visa expired, I had enough visa points to apply for a permanent residency (PR) independently. I was so happy. I was finally independent personally and financially. I was also finally an adult. I was 27 then.

I left my job soon after getting my PR. My former employer knew I had to fly away eventually, and I got a new job in web development. That’s where I met my husband Michael. He was my team leader. We worked together for a little bit, and we began dating. He soon quit to do his own thing, and I stayed around. However I’ve had enough of full time work, and began freelancing as a web developer, getting short contracts, and dictating my own hours.

In 2011 Michael and I got married. We were in Kensington then. My first child – a girl – was born in 2015, and I stopped contracting for a year to focus on being a mum. It was also my first brush with post-natal anxiety. I found myself being nervous all the time. One time, I went ice skating with my daughter but I found myself not enjoying it, and worrying about being a mother. That night, I experienced a panic attack.

She was asleep, dinner was done, and I should be relaxed but I was pacing up and down, and felt something was going to happen to me. I felt really weird. 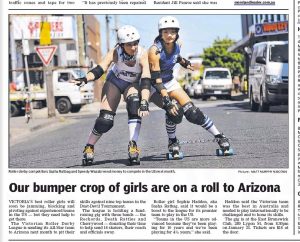 I didn’t know it then, but I had anxiety. I saw a therapist, who helped me through it and after a few months I felt it was under control and could enjoy skating again. Skating has always been my passion, and when I skate to music that I enjoy, that’s where I forget everything.

In 2018, we needed a bigger house. I was eight months pregnant with our second child, and we moved to Yarraville. It has a similar vibe to Kensington. I had heard of Yarraville through the Kensington Good Karma Network. I was really hard moving away from Kensington; it’s like pulling a plant out of the ground.

Yarraville wasn’t too far from Kensington, and for the first year, I found myself still going back to Kensington to do groceries and run errands.

After our second child – a boy – was born, I took another year off. In November 2019 I planned to go back to work 2 days a week, but I could find part-time development coding projects. Instead, I got an account management role. 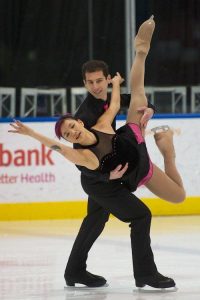 32yo – action shot in pair skating

I found myself visiting the HIIT Factory three days a week, but when COVID hit, it moved online. Very quickly, I got bored of Zoom workouts.

Lockdown happened, the kids were at home. I started roller skating a lot with the kids in Cruickshank Park, bringing music along. Kids would watch us, and parents would go ‘Wow!’. I would do a figure skating movement, and people would clap. At home, I have an Anna (from Disney movie Frozen) costume from a party, and I thought why don’t I play some music from Frozen, and put on a show, dressed as Anna.

I told my daughter to dress up as Elsa, and we were both so excited. I still remember that day. I know the songs really well, and I could mime it. I get a real high when people watch me skate, and I wanted to do more, so I started thinking of other costumes.

I’ve seen videos on Youtube of a T-Rex outfit, so I bought one off eBay. One time, I took this to Hansen Reserve to meet a friend, and showed her my T-Rex outfit. There was barely anyone else there, only a lady with her kid. This lady started videoing me, and later on I found out she turned out to be West Footscray local Tamara Oudyn, the ABC news presenter. I didn’t realise it then, but Tamara had tweeted a video of me in a t-rex outfit, and it went crazy.

A friend of mine saw it, and tagged me. I don’t have a Twitter account, so Michael commented on that post ‘That’s my wife.’ From there, ABC got in touch with me to do a story. That night, the story aired.
When the news came out, my friends were tagging and sharing the story everywhere. I thought, I need to make a Facebook page ‘Princess on Skates’ as per the ABC news piece title. I created it the next morning, and hundreds of people started following me. 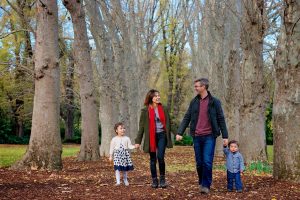 39yo – last year with family

Before Princess on Skates was created, locals were asking me to come perform in front of their houses for a birthday to break up their day.

At that time I only had three costumes – Princess Jasmine, Princess Anna and T-Rex. By then I was starting to ramp up my costume collection and working on ways to engage the community. Now I have 13 costumes. Some were donated from locals, and a dressmaker, including a blow-up Pikachu.

Lockdown was a blessing in disguise for me. If lockdown didn’t happen, I wouldn’t have been skating at the park and would have gone ice skating instead. Now I have this side hustle that I’m really passionate about.

I like to be impromptu, and not have a time or place to be dressed up. That way I can take my time getting myself and two kids ready. When I’m not dressed up, you can find me in Yarraville Village or a playground. I go to Beaton Reserve a lot. It’s the best surface to skate on in Yarraville . It’s hard to find a good surface. I’m often dressed up while pushing the pram with two kids on it.

Kids in Yarraville recognise me without my costumes. Often a kid stares at me, and I just smile, and they say ‘Is that the one who dresses up?’ or ‘That’s the fairy!’ or ‘That’s Tinkerbell!’

Michael always has the phone out during dinner, and I’d tell him off. In October last year, he was reading this article about Yarraville being one of the coolest neighbourhood in the world. He began reading it out aloud, and my name came up!!! What a shock it was to the family! We realised we were making a difference, and I realised this is my place and this is what I should be doing. People love it, and it makes me happy. Recently I quit my account management role to focus on being a mum and engaging with the community.

In 2021, my goals are to teach more people how to skate, and making it more accessible. I plan to do more roller disco at Beaton Reserve, and start a skating community.”