“I was born in Johor Bahru, a coastal town at the southern tip of peninsular Malaysia. Growing up, I always wanted to travel, and I loved reading the atlas. I was a bookish kid. Johor Bahru had American Peace Corps volunteers stationed in the city in the 1960s, and a couple of them boarded with my parents. I always had this feeling of wanting to be part of the wider world. At our local library in town, next to the post office, I’d borrow story books from the US and UK, and I’d imagine what life was like elsewhere.

Johor Bahru – JB to locals – was a quiet little town then. It’s linked to Singapore by a causeway, and many Malaysians cross the border to work. My Dad would travel every morning – basically to another country – and then commute home again in the afternoon. Many Malaysians work in Singapore, and many Singaporeans come over to JB for shopping and recreation. As the Singapore dollar strengthened against the Malaysian ringgit, the pull has become ever stronger. Today my old hometown has many new shopping centres, cafes and tourist attractions pitched at visitors. 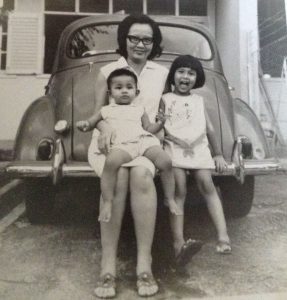 That’s Delia on the right, with her little sister and Mum. The old Morris Minor was the family’s first car.

I arrived in Launceston, Tasmania in 1981, as an exchange student on the American Field Service (AFS) program, after completing Form 5 in Malaysia, which is like Year 10 here. I feel Australia was a more trusting society then, and people were more likely to speak to you in the street. There were very few Asians in Launceston – almost everyone was white. Random people would speak with me on the street or on the bus. ‘Are you from Vietnam?’ they’d ask. This was during the ‘Vietnamese boat people’ crisis. If we got into conversation, people would often ask, ‘What do you think of Australia?’ It was innocent human curiosity, of a kind that I see less often today.

As an exchange student on the American Field Service (AFS) program, I had a terrific opportunity to learn about life in Australia. Local families hosted me through my year in Tasmania, and I had speaking opportunities at schools and clubs. There was a support system for exchange students, who were matched with counsellors from the local AFS chapter. I only fully appreciated what I had when I went to uni at the Australian National University in Canberra. There, I was the only Asian student in the English department, where I studied Literature for four years.

After uni, I went back to Malaysia, with the idea of wanting to work in a job involving writing. At the time, to become a journalist, you did a 12-month cadetship on a paper and learned on the job. Feedback from your editors could be brutal, and there were cadets who left crying.

I worked at a national paper, The Star, for three years. You had to deliver. Ideally, you would find your own stories and cultivate ‘news sense’ – an instinct for seeing what was or wasn’t newsworthy. I loved that environment and the camaraderie of the newsroom. As I had done Literature at uni, I spent my cadetship covering stories for the Sunday paper’s Arts section. I had free tickets to dance and theatre performances, and my book reviews and interview stories would appear on the Sunday paper.

I was interested in environmental issues, and I segued into covering environmental stories. I thought that journalism would be my life.  One day in 1989, though, the phone rang in the newsroom, and the switchboard operator said there was a call for me. It was my old boyfriend Laurence. Remember this was pre-Internet, pre-mobile phone, pre-Google, when finding out someone’s phone number really involved some serious research. We’d met in Tasmania and then had an on-again, off-again relationship while I was in Canberra. I’d been very sad when we broke up three years previously. Remarkably, he had tracked me down. He said that he was thinking of coming to Malaysia for a holiday. My first thought was whether I had the energy to go through all those old feelings again.

Laurence soon showed up at the house I was sharing with other journos and students. Long story short, we got married in 1990. I was 26 then. He had moved from Tasmania to study and then work in Melbourne, and I moved to Melbourne to be with him.

Our first home was in Stephen Street in Yarraville. It was a modest two-bedroom flat, which recently sold for over half a million dollars – I couldn’t believe it! We rented there for two years from 1990, before moving to our current place, which borders Cruickshank Park.

When we moved to Yarraville, the Sun Theatre was a derelict building. We would walk past and look through the grille, and see all the debris on the floor. We would catch a glimpse of the raked floor and the ruined seating, and think how great it would be if it became a theatre again. I still smile now when I walk past the Sun and see the crowd queuing for a show.

When Marita’s opened, I was so happy as it was the first shop in the village that sold pretty things, small luxuries, instead of essentials like meat and veggies. It was followed by others. It was exciting to see Yarraville Village thrive.

Our first child, a girl, was born in Melbourne in 1995. Immediately after she was born, we left Australia for a big adventure.

At the time, I worked at World Vision Australia, and I wanted to have a part in solving global poverty. On a research trip to Cambodia, I had become aware of a recently-advertised project manager role, working with street children in the capital city of Phnom Penh. Laurence was a youth worker at Melbourne City Mission then, and he put in for the role. Two months after our daughter was born, we left for Cambodia. 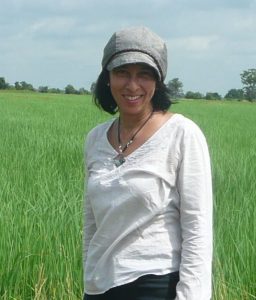 Delia in 2010. She’s in Cambodia, standing in rice fields, visiting friends from her time there.

We were in Cambodia for 10 years, and our two younger children were born while we lived there. We loved our time there, despite difficulties in the early years when security was poor and the electricity supply came and went. Cambodia was ‘old Asia’ where personal relationships mattered more than formal structures and systems. Our Phnom Penh neighbourhood was shelled during the 1997 coup that ousted the royalist FUNCINPEC party and placed Hun Sen firmly in power. It was scary but the aid worker community that we were part of was supportive and close.

With three young children, I began consulting as it fit my hours better. There were many aid programs operating in Cambodia, and I was able to pick up assignments in writing, editing and strategic communication.

I ended up managing public communications for an international river basin organization, the Mekong River Commission. It was set up to support the Lower Mekong countries – Laos, Thailand, Vietnam and Cambodia – cooperate on a shared resource, the Mekong river.

When the Asian tsunami struck in 2004, we moved so that Laurence could be part of the international relief effort, which World Vision was operating out of Singapore. Then in 2006, a work opportunity came up in Bangkok, and that was where our family lived for the next seven years, before returning to Melbourne. My children have their best memories of going to school in Thailand.

We always felt though that Melbourne was still our home. We returned in 2014 as the work situation changed, and we wanted our children to get to know day-to-day life in Australia – they are Australian citizens, after all.

The inner west has changed a lot in the 20 years since we’ve been away. I love going into Footscray on a Saturday morning to shop, eat and people-watch as the different waves of migration have all made a mark here. It’s like a crossroad of the world. 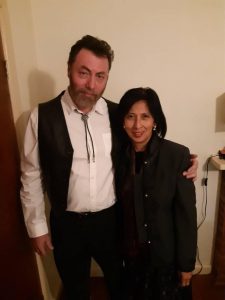 I recently had a visit from Cambodian friends, and I had to crank up my Khmer language, as it’s rusty now. I speak a few languages, including Bahasa Malaysia, English, Khmer, with a smattering of French, Mandarin and Thai.

My work at the Mekong River Commission introduced me to intergovernmental cooperation, and it has served me well in my current consulting work. For the past eight years, I’ve done sessional work reporting on multilateral environmental negotiations for a think-tank, traveling to UN meetings and producing conference bulletins. My life in Yarraville now is punctuated by travel away to UN meetings several times a year, often to Geneva, Nairobi and Bangkok.

I’m always happy to get home again though. In my free time, I enjoy shopping at Footscray Market, and walking at Newport Lakes or the Jawbone Reserve at Williamstown. I’ve always loved dogs, but as we often go away, we’ve settled for a cat, who is king of the house.

Besides my consulting work, I manage communications part-time at a not-for-profit group, Initiatives of Change, that supports peacebuilding and trust building in local communities in Australia and overseas. I love being part of an organization that is encouraging people to ‘be the change you want to see in the world.’ I identify with it, as I believe it’s not only policies and structures that make a better world, but also the personal choices that we make in everyday life.”