I was born in Melbourne, and have been here my entire life. Along with my younger brother, we grew up in Malvern, in a big Californian bungalow that was built in the interwar period.

I had a very uneventful education, as I was a well-behaved student, and was pretty academic. I wasn’t good at sports, and really loved writing, drawing and acting. I particularly liked history. 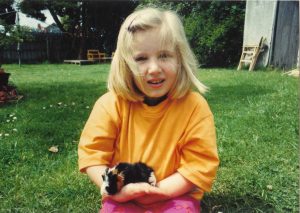 6yo Eden, with pet guinea pig

My parents split up when I was 15, and my dad moved out, leaving my brother and I with Mum. I wouldn’t describe it as particularly difficult for me, as things were better for everyone afterwards. It was less tense. I helped out with the cooking a lot after school while Mum worked.

This was also around the time Dad told us that he is gay. As a teenager, it was a massive shock for me, and it took a long time for me to not feel like I had to hide this piece of information about my family. Of course, things are different now! We get on great and catch up often.

I have two main interests – history and publishing.

When I was younger, I used to do a lot of digging in the backyard of our old home. One day, I found fragments of a 1930s ceramic planter. It was gorgeously vintage: blue with flowers all over it.

I dug all the fragments out, and glued it all together. I thought it was so amazing to find something in the dirt that had been just laying there all this time. I started digging in this spot regularly and found other things, like small milk-glass vessels, cutlery and other old household rubbish. My mum found a snail-chewed 1940s Donald Duck poster and a ceramic chamber pot underneath the house, too.

I also did a lot of reading on history, with a particular interest in non-fiction, early human evolution and anything medieval.

I followed both of my interests separately, and it’s only in the last few years that it has all come together. 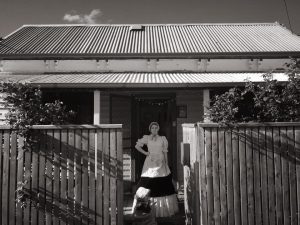 Costumes to simulate a historical photo

I went to Melbourne Uni, and did a Bachelor of Arts. I didn’t realize I wanted to pursue publishing until the last year of my degree. I was the Arts subeditor at Farrago, the Melbourne Uni magazine, and got into post-grad for Editing and Communications, which was a one-year Diploma course at the time.

At the same time, I was working as a proofreader at Merrywood Publishing (which no longer exists). I was learning on the job in a role that I enjoyed, and was getting paid as well, so I never extended my studies into Masters. I learnt a lot here – especially how to express your advice kindly to an author!

I have been with my partner since I was 18. We were living in the Eastern suburbs, and decided to get away from the places that we knew. We realized we never explored much outside of my zone, as I was too focused on studying and working, and never explored the west.

We found a place in Altona, which was really close to the beach.

The people are just so much friendlier here in the west, and we instantly loved it. We did move back to Hawthorn once, and found it so isolating, as neighbours would simply ignore us, even when we waved hello! 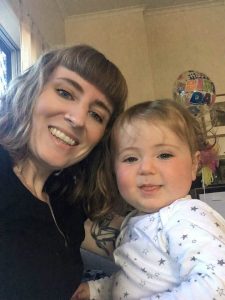 By my early-20s, I was pretty well-entrenched in my job, and had earned enough trust that I could take extended breaks to travel and explore overseas (a month or six weeks at a time). I was the Assistant Editor in a CBD-based publishing company called Executive Media.

We decided to buy a house in 2011. We looked in Richmond, but found it ridiculously expensive.  One day, we were driving through Seddon, and we realized we’d never been here before.

‘What a sleepy little hollow’, I thought.

There were probably two or three cafes back then, there was a video rental place, a huge furniture store and a large baby-goods shop. Everything was shut on a Sunday, and it was quiet and peaceful. We did find a house within our price range, and bought our first home in October 2011 – a tiny two-bedroom cottage with no ceiling and an outdoor toilet. Over the years, we fixed it up slowly.

The property was recently rented out, and we now live in Footscray.

I have been at Executive Media for most of my publishing career, and have been able to progress quite quickly with my profession. I was 24 when the Managing Editor left, and the editorship of all the magazine titles were divided up between my colleague and I. It was a baptism of fire, but a great way to learn. At 26, I fell pregnant with Esme (now 7), and took a year off. I’ve been part-time ever since, and absolutely love the work-life balance. 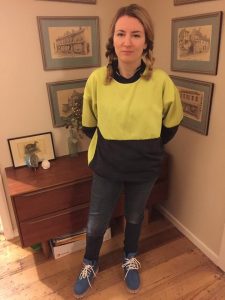 One day, I got an e-newsletter from Inside History, a history publication that I had followed for about six years. The email said they were shutting down. I approached them and asked if they would be interested in selling the title to Executive Media.

After a few months of negotiations back and forth, the owner changed her mind and decided to completely shut the publication down nonetheless.

However, I had done so much research on the audience, numbers and content, and thought ‘Why not release our own history magazine?’ I am grateful that my boss was willing to give it a go.

I called it Traces.

Traces is the only consumer print magazine on Australian history and genealogy. Launching Traces was an amazing experience, as I managed everything from the concept to the launch party.

90% of the readership are women over 60. I think as people get to a certain age, they get curious about their background, and take a DNA test. They fall very quickly into a rabbithole of what is a very complex world of genealogy research, and they get obsessed.

Alongside general history articles, we publish stories on all manner of genealogy topics, from how to research your German roots, to reading old handwriting. 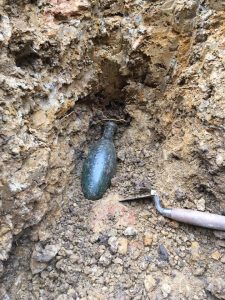 In 2018, I started pursuing my interest in heritage more, and volunteered as an Assistant Archaeologist in the Wesley Church excavation in the CBD. I gained experience digging with mattocks and trowels, and learnt how to wash and catalogue small artefacts. I even made my first find – a Victorian torpedo bottle, intact! It was an incredible experience to see the layers of Melbourne’s history emerge. From that I gained paid work on a few different projects, including on-site at the Hallenstein Tannery excavation in Footscray. Afterwards, I flew to York in the UK to participate in an archaeological excavation of a Victorian-era church cemetery, where we carefully uncovered skeletal remains in old graves, as well as Roman artefacts. That was a once-in-a-lifetime experience, too. Not many people can say they have dug up human skeletons!

When I returned, I fell pregnant once again, but our little boy, Robin, was stillborn at just under 7 months. I spent a long time recuperating from his loss and happily gave birth to Vera almost exactly one year later.

What’s keeping me busy these days?

I have a lot of pets! We have two miniature pinschers, six quails, a little group of gold ocellatus, and we’ve just lost our leafy stick insect who died of old age. I love spending time hanging out with the quails, who live in a big coop in the yard. We get pretty little eggs from them for breakfast! 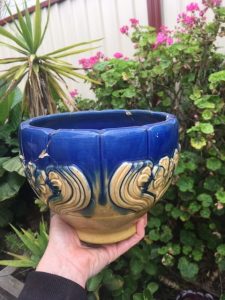 The 1930s blue ceramic planter Eden found in her Malvern backyard. It was glued together, and she has kept it with her since.

I’m also studying a Masters of Museum Studies and Cultural Heritage through Deakin Uni, with the ultimate goal of a future shift into heritage work. It’s been a bit of an adjustment to go back to study after 12 years!

I’m also currently working on a Westside kids history project, which is something I started in April this year. The purpose is to reframe the pandemic for kids in a positive way, as a momentous time in history that future historians will find interesting. It is a PDF pack that has gone out to several hundred local families, and is fun for kids as well as useful for future historians.

In 2014, I started Bubba West with my friend Emily Raubenheimer. We ran a website and launched a magazine, printing eight editions of  Bubba West Magazine over 2 years. At this time, there wasn’t much information out there about activities for local families, so we were filling a gap and were quite popular. Eventually, we both ended up returning to our jobs and didn’t have as much time to put into it. There was growing market saturation and we felt the magazine had run its course. It was, however, a really great experience and we both took a lot out of it. 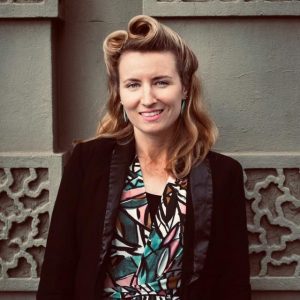 For most of lockdown, I’ve found it a lovely experience to be forced to stay home. I’m very introverted, and am pretty much a homebody. I’m not missing the social gatherings too much because we have email, phone and Facebook, and It’s been really nice having more family time. I’ve been doing a lot of baking. I love baking novelty birthday cakes.

I’ve also been teaching myself the ukulele; it’s my latest obsession.

I love op-shopping, and that’s what I’m really missing now during lockdown.

When Covid is over, you can find me at Savers on the weekend, hanging out at Footscray Gardens, drinking coffee at Rudimentary or Small Graces, or exploring an old town in Victoria. Maldon is my favourite!