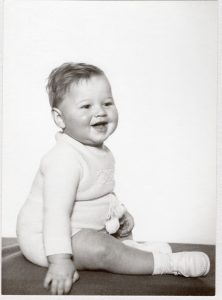 “My partner and I lived in Hawthorn for nearly ten years before we moved over here. We couldn’t afford to buy one there. We looked in the Inner West after going to a party in West Foostcray. We drove past a house, saw a sign out there and decided to ring them.

We’ve been here for 13 years since.

No one likes crossing the bridge. I’ve got a good friend in Richmond, and there’s a perception that the West is miles away. They don’t realise it’s not far at all.

I’m the youngest of four kids. I have two older brothers who live in The Basin, and an older sister who lives in Rosebud. Mum recently went to God in March, and Dad is still in East Melbourne.

I was just a normal kid growing up, and went to Caulfield Grammar. I knew what the boundaries were growing up but pushed them hard. I did my undergrad in Monash Uni in La Trobe Valley. I was an 18-year-old boy who got dumped there, and it was a big cultural change. I’ve never worked with women before, so was shocked to find myself surrounded by ladies. 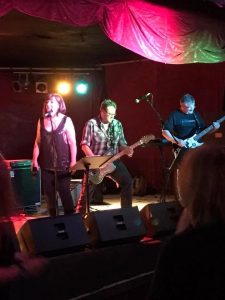 I graduated four years later, after stretching it out for an extra year due to getting into much mischief. I’m still friends with a lot of them today. I did my Honours in Australian Politics in Clayton campus, which I only pursued as I realised it had no exams. The thesis I wrote about was how the Internet would change the Music industry.

The idea of having Internet music stations was foreign in Australia back then, as they were mainly streaming out of the US then. 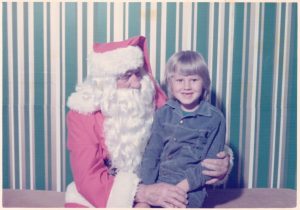 I started working in my mid-20s, in a local government role, and went into management for ten years. I was made redundant in 2011, which was timely as my twin boys were born then. We already had a three-year-old daughter by then. I spent 18 months as a stay-home Dad, which was good. Imagine, three kids under three!

In 2014 I secured a role with Laser Group, and looked after Western VIC, Northern Melbourne and TAS.

I used to play guitar when I was younger, and have always been interested in music. My older brother was in a band – he’s still in the same band now – and was gigging a lot. I saw them a fair bit. One Australia Day in 2015 or 2016, we’d gone down to Hanging Rock Races. Coming back on the late train, we were sitting in one of the booths. Another passenger – a young man – asked where we’ve been.

When we told him we’ve been to a gig, he asked how old we were.

‘Christ,’ he said. ‘You blokes are all older than my old man and all he does is sit and complain on the couch.’

That resonated with me. I told myself I never want to be that man. 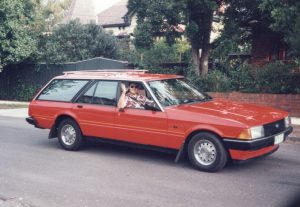 I do a lot of driving and listen to a lot of podcasts. One day, I was listening to Proopcast from comedian/actor Greg Proops, and he talked about the Wonderful Wizard of Oz trilogy was written by L. Frank Baum when he was 37 years old. Greg said ‘What have you done with your life?’ and I felt like Greg was talking to me. I decided to buy a guitar, and that’s how it started.

As much as it embarrasses my kids to see Dad on stage, it’s about giving them a reason not to say ‘Dad is on the couch complaining. He doesn’t have an interest.’

I don’t want to be that Dad.

I went for a Dad’s drinks with fellow Kingsville Primary School Dads in 2018, and the Dads decided to form a band. We couldn’t think of a band name, but as we all lived in West Footscray and were close to Hansen Reserve, we decided to call us just that. It’s our spiritual home, and it was just easy.

Our highlight was raising money for the bushfire at the start of 2020. I saw my brother do a live stream of his band, and I liked the idea of getting a live stream together. I floated the idea to the boys and do a fundraiser. We haven’t rehearsed in awhile, and we didn’t think the response would be really good, and were happy to raise even a few hundred dollars. We never expected to raise over $6,000 for Foodbank. 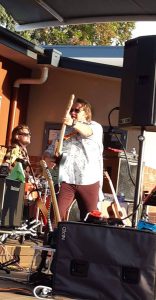 We were mentioned in Federal and State Government, had Federal (Tim Watts) and State Members of Parliament (Katie Hall) turn up, and even the CEO of Foodbank and Mayor of Maribyrnong appeared. Our expectations were genuinely low, and all of a sudden we’re a bunch of Dads doing covers on live stream!

We couldn’t do a gig in 2020 due to lockdown. Just when we thought we could get out and do something, we were locked down again. Going forward we want to gig on a more regular basis. We’re kind of aiming at the ‘Band in the Party, Backyard or Sporting Club’ type of vibe.

I work for O’Brien Electrical and Plumbing. They’re the same guys who do the glass and the catchy ‘Oh oh oh…O’Brien!’ jingle. Did you know that the jingle hasn’t been aired for about 11 years? I’m fortunate that the business is very flexible and allows me to be a dad. I try to start and finish from home. My office was in Doncaster, and I would drive there all the time. Now that Head Office is in Sydney, I plan my day to start and end in West Footscray.

I’m a black teeshirts fan, and have been buying black teeshirts on Ebay. I’m always surprised how long it takes to arrive. I bought one in late-May from a company who claimed to be in Australia, and it only turned up in mid-July, enroute from Russia. 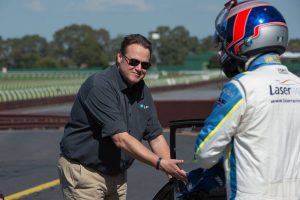 All my guitars are heavily modified. My wife knows nothing about my guitars and have bought and left them in the garage for three months, without even knowing it’s turned up. My first guitar was an electric guitar, which sat in the garage. On Christmas Eve while everyone was in bed, I wrapped it and placed it under the Christmas Tree for myself.

I bought another one and did the same thing. Once, my daughter came in when I bought it and I told her not to tell Mum and kept giving the guitar to myself.

On weekends, I’m doing stuff with the kids. I walk the dog a lot. She’s fairly active, and we’d walk down to Hop Nation, up The Vic Hotel and back to Hansen Reserve.

I went through the Sons of the West program, and got a few good friends from there. We’d walk our dogs together, and on Wednesdays or Fridays we get a personal trainer to jump up and down with us. 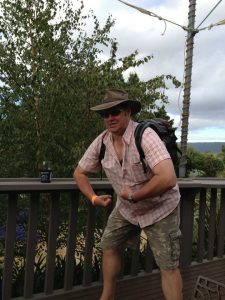 I used to smoke, and after I quit smoking I put on 30kg. It’s why I get out every morning and do a few laps – to get active! Most days we’d do 15km; she likes her walks!”