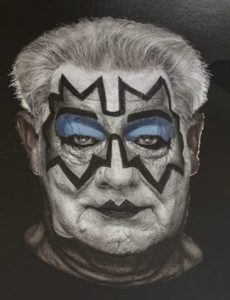 “I’m the oldest of three, and was born in Sale in 1929. Mum and Dad had moved there to get married, and that was where I was born. Mum is of Scottish and Swiss descent, and Dad’s of Irish descent. Their parents had migrated here in the migrated here due to the famine in Ireland. They settled in northern Victoria, but moved to Castlemaine after. Dad bought the old farms around Castlemaine, and my grandfather bought my dad the local pub.

The pub is at the corner of the main street, and was called McMahon’s Pub at that time, but it’s since been purchased by someone else and renamed. We have been there many times.

We were told stories of gold trickling down the hill. When it rains, my dad remembers seeing all these specks of gold, sitting in the big gutter.

Dad left Castlemaine for Melbourne when he was 14, after getting a job working in the engines and boilers of trains. He didn’t like it, as it involved squeezing into tight spaces. He got a job in the signal boxes for various stations, and he stayed there for life.

Dad has always been in the railway industry. When I was a year old, he had gotten a promotion in the local railway, and moved to Ballarat. There was where my younger sister was born. 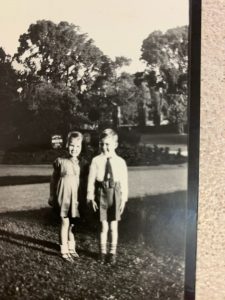 John and his sister Helen Williams

I remember there was a kid on Christmas Day, and he had gotten a pedal car for Christmas. I was two then, and it was a dream of mine to have a pedal car. And that kid was pedalling on the street. I didn’t even have a bike.

Mum and Dad weren’t wealthy. He worked his way up in the railways over the years. As a kid I used to go up there, and he’d let me have a go at pulling the lever. I was a really small kid, and could never succeed in pulling it. Dad would just end up lifting the lever himself. You have to pull the level when the train is 500 metres away. It was hard work.

A few years later Dad moved to work on the signal boxes for Sunshine station, and finally ended up in Newport Railway Station. They had railway gates there, and there’s a big rail yard as well. It’s always busy.

As the traffic was always held up, bus drivers would come up and bribe Dad with money to open the gates. The trains would pick up 50 carriages, and took a long time to go past the gates. Often, trains would just not move.

When I was about five, I went to the school in Blackwood Street. I wasn’t there for long, as I learnt to swear there. Mum took me out of school, and sent me to Saint Augustine Catholic. These nuns were pretty mysterious people to me, and instructed us to do everything right.

I remember it was cold, and in winter they’d have sawdust on the floor to dry our shoes. They were pretty strict. The brothers took over after Grade 6, and they were much better as they taught subjects that I enjoyed such as chemistry.

I left there at 12, and went to Footscray Technical School. The Brother in charge there wanted to send me to Christian Brothers in South Melbourne, and Dad said ‘No!’.

‘We’d give him a scholarship,’ they said to Dad.

Dad was adamant, and wouldn’t want me there.  I still made it to Christian Brothers, and I had my best two years in there. Once, I missed the entrance exam as I got the wrong date. They accepted that it was their error, and put me to 2RE, a repeat grade. I’d breeze through Math all the time, as the Brothers in Yarraville were teaching me the higher grade stuff. My Math teacher at Footscray Tech would chide the class and say ‘Why is McMahon getting 100, and you lot can’t get 50?!’

When I was in Footscray Tech I got a job in an upholstery business. It was on the West side of the railway gates of Anderson Street, Yarraville. It was a big furniture building, and I did it for two years. After I left school in 1946, I tried a job as an upholstery apprentice, but I wasn’t accepted.

The bloke offered me a job in the Monsanto Chemicals, on the Brooklyn side of Somerville Road. I stayed there for 46 years, starting out as an apprentice, before becoming an electrician. I was promoted as the Leading Hand, and was 21 when they offered me the Foreman. I became the Supervisor, and it was a fun time for me. They let me do pretty much anything. 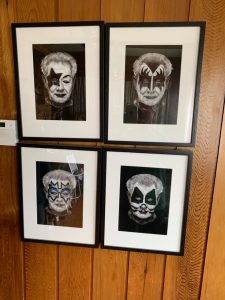 KISS versions of John, organised by his son Marcus as a birthday present when John was in his 80s.

I met my wife Gwladys in Moonee Ponds Townhall. I was with a girlfriend, but when I met Gwladys I realized I liked her more. I dropped the other girl, as I realized Gwladys wasn’t as demanding as the other girl.

Gwladys had a good fun life with me, and she passed about 18 years ago.

I moved into my current home in Yarraville in 1952. I could have picked any block of land on the street, but bought this current block for 300 pounds. I picked this block as it was on a downside hill, and I wanted to face North. It was all the money I had, and I designed it myself and built the house after reading a book on how to build a house.

When my wife Gwladys and I got married in 1954, the house still wasn’t plastered and the tap was still out in front of the house. I didn’t like getting my hands dirty, and got Dad on his days off to help build the house.

There used to be a bridge at Yarraville station. They pulled it out as it wasn’t user-friendly, and wheelchairs could not use it. It didn’t worry me.

I used to play tennis in Anderson Street. It’s not where the tennis courts are now, but further down on the other side of the road. There were three courts there, where the apartments are now. I used to play there all day and weekend, and we’d meet all the girls there.

I’ve now learnt how to cook and wash. I never had to cook. Sometimes when the kids visit, I do a crockpot of vegetable. Once, my grandsons – who normally come on Tuesday nights – didn’t come. So I ate the same dinner for four days in a row.

I’d cook every night, and it’s a simple meal of broccoli, brussel sprouts, beans, a tin of tuna and meat from Coles. I keep it pretty simple, and sometimes I have red salmon. It’s good, and I like it. My doctor was always amazed at me. I’ve told him ‘If you drink what I drink, you’d be just like me.’”