“I’m the oldest child, and was born in Bristol, England. My parents had travelled to Australia a few years before I was born. They travelled around the country in a Kombi van, and are passionate scuba divers and windsurfers, so naturally fell in love with the beach weather. They returned to Australia after I was born, and settled down in Perth. 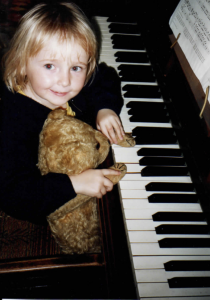 The beach is a big part of our family life. When my parents first moved to Australia we were down the beach everyday, even in winter! I suppose it was quite warm for them. My 2 siblings and I are all swim teachers, with one of my siblings being a lifeguard as well (she is now a Marine Biologist). Majority of my family have our scuba-divers licence, and we all love to boogie-board/surf.

A weird thing about me… When I was seven, I was playing on the beach when I leapt down a sand dune and got a stick stuck in my knee. I went to the hospital and had it taken out, but failed to realise a second stick had gone into my leg further down and the skin had healed over! A year later my leg was trying to get it out! I had to have a second surgery at the doctors to remove it. Super freaky and weird.. what were the chances?

Sport and health is also a massive part of my family’s life. We love swimming, playing tennis, cycling, soccer, AFL, and the more flexible of us (not me) have done gymnastics, diving and trampolining. My brother has just started studying a Health and Fitness/ Business Management degree at UWA this year, the last one to leave high school last year.

And probably one of the most important things in my family is music. 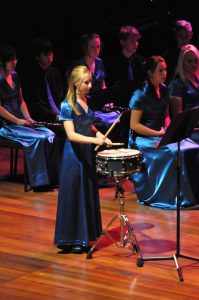 I grew up in a musical family. Dad is a drummer/bassist, and my siblings are all musicians as well. Mum wasn’t a musician, but as a teacher and researcher, she had read so much about the importance of being involved in music. She was more than happy to drive me to all my lessons and performances during my primary and high school years. As a result, I got into piano and violin at a really young age. My younger siblings both also got into music; my sister played clarinet and saxophone, while my brother started on violin and switched to voice.

In primary school, I was always really loud and forgetful. I’d leave my violin at home, and was constantly distracted. I was always tapping my fingers on the desk. Picking up drums gave me focus, and with the added encouragement of my awesome year 5 teacher, it all came together for me. When I entered high school in year 8, I started studying percussion, and completed year 12 winning the Tom Kent scholarship for performance in 2011 (which my brother won last year). I went on to study Music at the University of Western Australia, graduating in 2015.

I knew from an early age I would never get a typical office job. It’s a young and naïve way to think, but there are many unhappy people out there in unsatisfying jobs. Choosing music is hard, but I wanted to be happy. 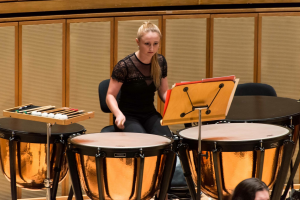 Until the end of uni, I was always surrounded by strong female percussionists. It wasn’t until I started touring, I got a lot of strange misogynistic remarks from people in other countries.

“How are you the drummer?”

“You can’t be the drummer!”

It was very normal for me to be a female percussionist prior, but was shocking when I met people with stereotypes on how a drummer should look, or act.

Some female percussionists/drummers identify as more masculine because that’s just who they are. Occasionally it may be to meet people’s expectations, but I think more and more are just caring less about what everyone else thinks, which is how it should be. We should all just be able to get on with our lives and who we are without being judged by others. I identify as quite feminine, and will often wear dresses (if my instrument permits it) because I enjoy it. 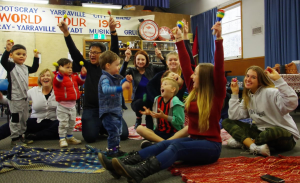 I moved to Melbourne in 2017 for music therapy, after being offered the course. I’m still super passionate about it, but soon realised how many gigs I was getting, and how great the performance scene is here, so I put it on hold. I found it relatively easy to start performing here, and live off this line of work.

However, I wanted to support that passion, and considered something else on the side, as I was semi-professional, with no salary. Hence I began teaching (which I absolutely love). 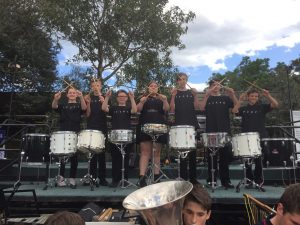 My greatest passion is performing. However, sometimes it is hard to separate who you are as a performer, and who you are when you’re not performing. If I am not practicing well or playing well, it feels really bad, and I judge my whole character on this. The older I get, the more I realise how important it is for my mental health to separate the two.

At the end of 2017 I did a gig for the Footscray City Brass Band, helping to record their CD. I was really interested in the band as they had recently purchased a brand new set of Yamaha timpani, which is hard to find access to, and too expensive to buy. I love the timpani and always have; when I was young I just gravitated towards the biggest and the loudest. It’s a reflection of my personality, and I enjoy being on stage and bringing joy to the audience.

This relationship with the band, and the number of young percussionists within the band and youth bands below it, led to a realisation that there was no specialist school for percussion in the Inner West of Melbourne. 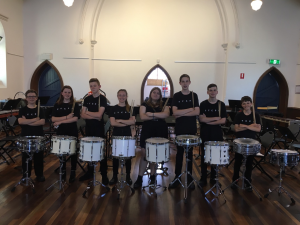 Hence, at the beginning of 2018, the Footscray-Yarraville City Percussion Academy was born. My dream for the academy is to have a one-stop place for percussionists of all ages and abilities, to be able to get specialised training in classical (and other) percussion and drumming. My specialisation is classical music, so I bring in all sorts of other professionals in different fields of percussion. We have had Brazilian Samba workshops, African drumming, Jazz Vibraphone, Stomp! style workshops inspired by the British group, and many other influences coming in, such as American-style drum line.

I run a toddler class (under 5’s), a juniors ensemble (ages 6 to 10), senior class (ages 11 –17) and I privately teach around a dozen students. We are located at Victoria University – Nicholson Campus, which is a fantastic set up.

I absolutely love teaching so much. I am very passionate and enthusiastic, and I think the students feed off that energy. I think I love teaching kids the most, as I get to still be kid- like in my energy and excitement to inspire them and play.

A BIT MORE ABOUT ME

I’m sure this is not what Melbournians want to hear, but until I arrived in Melbourne, I had only drank instant coffee. I had a shocking coffee palate! My boyfriend, fellow musician and events live-streamer, grew up in Richmond which has many amazing cafés. He has been teaching me all about good coffee. We live together in a house with a grand piano, drum kits, vibraphone, xylophone, timpanis, keyboards, guitars and brass instruments, and love to jam together and with friends. We frequent local cafes in Maidstone, including Jack B. Nimble and One for the Crow. 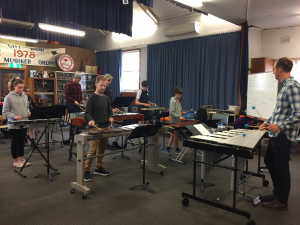 My parents had always taught me to be self-sufficient. My family home in Perth has solar panels, a water tank, veggie gardens and worm farms. We reuse everything in Perth. It’s hard when I’m renting, but I try to embrace everything I can from that lifestyle. We grow our own veggies and herbs, and my partner bakes his own bread. We use reusable bags, buy second-hand clothing/furniture, bulk buy, ride our bikes, use environmentally-friendly soaps and liquids, and have just about eliminated all use of glad wrap and tin foil. I do like going to the climate change protests. I believe more needs to be done from the top-down, but we can do all do our little bit as well to help the environment. It all counts.

In 2020, my focus is to attract more teachers into my academy, and find a better balance between teaching and performing. I would like to go back to complete my Masters in Performance eventually.

Happiness is integral to me. Money is important, especially as I get older, but the balance has to be kept. You have to love life!