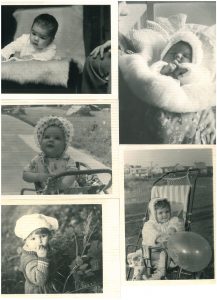 “I was born in the old communist Czechoslovakia in 1980, in the town of Pilsen, like the beer. All the towns in the West have double names as 40% of the people spoke German originally before the Second World War. It’s Plzeň in Czech, and Pilsen in German.

I’m the oldest of four kids, and have two brothers and a sister. I was always responsible for them, including the cleaning and gardening. In that era, you are not allowed to get christened, or have a second name.

We couldn’t just buy fruit and vegetable. We had bananas twice a year, and had to queue up. Each family would be allowed to buy 1kg of bananas. If my great-grandmother was in town, she’d go and queue up too, and would up separately. We would end up with two kilograms of fruit.

At certain times, we’d have other exotic fruit like oranges and coconut. In any case, you couldn’t rely on shops; my mother grew everything herself.”

“Life was simple. There were a lot of people who couldn’t do what they wanted to do. My mum’s family had a very bad political profile as her dad had worked in Skoda, and was really big in his industry. He travelled overseas a lot, and people in the village were bitching about him. They said he didn’t go to the communist party meetings, and wasn’t a true communist. 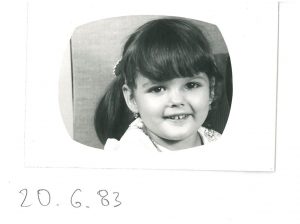 Mum couldn’t study what she wanted to study. She wanted to be an architect or psychologist, and would have been amazing at both. As she was one of the kids from the ‘bad’ family, she had to get a real job, so she started off as a nurse. If you’re not from a ‘good’ family, you’d have to be in the working class. The nurse job was handy as Mum has four kids. Eventually she was lucky enough to meet a kind person that overlooked her bad political profile and gave the right stamp. That allowed her to study and become a teacher. That became her lifetime profession.

When the communist regime fell in 1989, I remember everyone was dinging their keys in Prague. I was nine then, and could study whatever I wanted to pursue. A Christian high school opened up, and everyone went ‘Woah! We have religion!’ Religion was previously forbidden, and priests were put in jail. There was now a new boom in all kinds of religion and I was one of the first students in a completely new system. I’m an atheist, but the school was very special. It’s still there. My whole family went there. I remember all the teachers shook everyone’s hands, and were so happy history could be taught the way it actually happened.

I was a good student, but Mum kept me busy with my siblings. I had few friends, and was a weirdo. Those few friends I made in those years have kept in contact with me all these years.”

“There is a 17-year age gap between my youngest sister and I. Mum was 39 when my sister was born, and 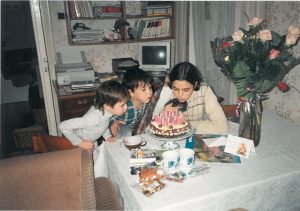 was considered super old to be a mother then. People were telling her to have an abortion. Her pregnancy was considered critical. We have a countryside house, which is about 30km away from our house in the town. Mum would always go there to tend to our chooks and vegetables. When she was pregnant, she couldn’t go to the countryside house. I had to go there instead, and over summer I got all the five chooks, our neighbour killed them, I plucked them, gutted them and portioned them for the freezer. I was busy as a young adult. I remember playing the piano and guitar, but had to give up the guitar to help Mum.”

An exotic Aussie in Prague

“When I was in uni, I was accepted into Drama and Acting on the other side of the now Czech Republic. The country was divided in 1993, and uni was four hours away. I still went home every weekend. I speak three languages – English, Czech and French, and studied in Prague as an exchange student halfway through uni, and did programs in the United States, Holland, Japan, France and the UK before I finished Uni. 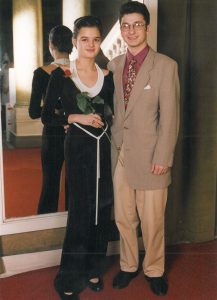 Debutante. I went younger than everyone else as I had a ‘serious’ boyfriend who liked dancing. Rudolf is his name. I was about, 14?

In my final year of uni, I met my husband Julian. He’s Australian and was the manager of an Irish bar I worked in. It was full of international clients, and I was waitressing. I was the only one getting tips. All the other waitresses hated my guts, and I was getting more in tips than wages.

An Aussie in Prague is exotic. Czechs dress seasonally and have four different wardrobes for each season. Julian was walking around the cobblestones in thongs and Hawaiian print shorts, and it was 15 deg Celsius.

We started dating, but not long after Julian got a job in England. I said bye to him, but he asked me to go along with him, I thought he was crazy. Those days, 30km is a long distance, and I laughed at him. I remained in Prague to complete my studies. Somehow, we couldn’t shake each other off. Julian invited me to Australia, and he and his mum booked a cabin in Eden, NSW.

I arrived in Melbourne in 2004, and was driven through the Blue Mountains. Eden is in the middle of a pristine jungle. There are pelicans, parrots, lorikeets and dolphins at sunrise. I remember going fishing and caught a snapper. I thought the trip was the craziest things.

My mother-in-law’s plans worked – she wanted me to stay in Australia as Julian had been away for eight years, and I decided to stay. But not before I tested Julian one last time. 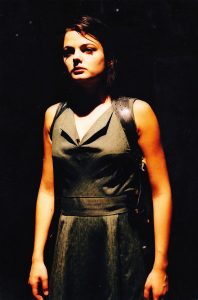 My graduation one-woman show at the Janacek Academy. I got a Masters in Drama and Acting.

I was working in Japan as a bar manager in a strip club by this stage. I planned a big trip with Julian to go all over Australia; if I was moving to Australia it had to be the right decision. We travelled around the country in a Suzuki Alto that couldn’t do more than 80km per hour for three months. By the time we went scuba diving in Cairns, I had fallen in love with Australia even more.”

“I proposed to Julian in Cairns, and he had to complete a divorce from a previous marriage to another Czech girl. We got married in an amazing 12th-century monastery near Mum’s countryside house. It was a big fat Czech wedding, and we danced till 4 in the morning.

We relocated to Melbourne, and Julian moved back to uni as a mature-aged student to pursue horticulture, which he what he does now.

We lived in Richmond for awhile, and bought our home in Kingsville in 2008. This was the only home we could afford that was close to town. I hated it here for the first year, as the house and the suburb didn’t look the way they look now.

The old wogs, as nice as they are, had nothing in common with me. Kingsville was dodgy in 2008, but it started changing very soon after we moved in and all the houses have changed at least once since. We now love it. It’s a beautiful neighbourhood, I have amazing friends, our kids all play in the street, and there are great schools. However, all this only happened after we moved in.”

“I started my photography business in 2008. I was assisting fashion photographer Peter Coulson then, and when my Mother-in-law remarried, took the photos for her wedding. She has always hated her photos, but she loved mine. I was also pregnant then, and started taking photos of my own kids, and found real-life photography fascinating.

Capturing the emotions of kids and families – that’s what I like.

As I was friends with parents with kids of the same age, word-of-mouth began going around, and people have always asked me for photos. 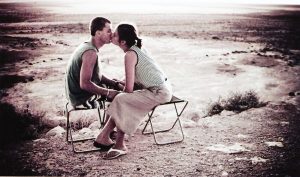 Travelling around Oz in the Suzuki Alto

When I started photography, established old-timers were freaking out, claiming digital photography would spell the end of their jobs. A lot of female photographers were starting out then, in what was previously a male-oriented industry, done in a very traditional way.

The family portraits would be taken in a studio, and they would scare the kids a little bit. I had male photographers laughing at me when I started. They’d tell me to go back to my babies, as I don’t know my numbers. I didn’t know how many pixels my camera had, or what the numbers meant, but I knew how to take a good photo.

When women – and mothers – around the world start doing photography, we were stopping the old business of pushing the sale of overpriced prints. The male photographers would destroy the prints in front of clients if they decided not to buy it. Women photographers realized the best way forward is to sell JPEGS.

It was a revolution in photography. The industry people were telling women not to sell JPEGS, as we are ruining the industry. Many said we are silly.

In 2007, Peter Coulson introduced me to an owner of a pole dancing studio. Arriving for shoots, I was always carrying all the gear, so I needed upper body strength. I took up pole dancing to keep myself fit and healthy. It’s sexy dancing and I enjoy it. I live with four boys, and I need to escape! Pole dancing nurtures the female dancing and sexy part of me, and I’m on my own, in my little world. 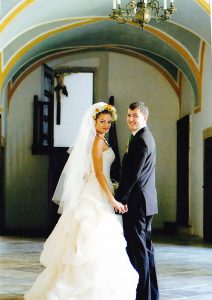 Our wedding in 2006 at the monastery.

It took me years before I realized pole dancing photography is something I could turn into a business. I loved the creativity that it allows, and there is no roof to it. There are many beautiful dancers who are keen to be photographed, and I know the craft, as I do it myself!

I have been going to Bottoms Up Burlesque & Pole School in Brunswick for over ten years. When I started, I wouldn’t share with anyone that I’m a pole dancer. The industry was just coming out, and people would easily judge you for your hobby.

Pole & Hoop Photography is my creative outlet, and allows my photography to be taken outdoors, and dancer could have their images taken in nature. I’ve had dancers pose at the Dandenong waterfalls, Altona beach at sunrise, under bridges, at a river or in the forest.

I’ve brought Pole & Hoop Photography to Czech Republic, where there are pole dancers and pole dancing communities everywhere. In 2020, I’m planning shoots in France and interstate. There are plans afoot to have an exhibition in the inner west in 2020, and I’ve had people asking for the same in Czech Republic.

I want to get to the point where I would spend three months in Europe, and the rest in Australia. We spend about a month camping in national parks across Australia annually. That’s how we recharge and reconnect as a family. 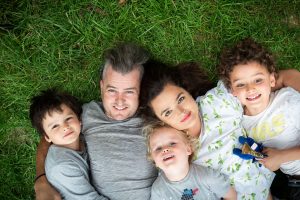 On weekends, I’m often shooting family portraits or pole dancers, so I’m rarely free. I’m also active in the Czech community, teaching in the Czech school every other Saturday in North Melbourne.

As a Kingsville resident, I love Willow café. You can often find me along Williamstown Beach or the Botanical Gardens, or Newport Lakes for family photos. I love Altona Beach for Pole & Hoop photos, and all the new stuff along Maribyrnong River.”