“I was born in East Melbourne and grew up in the Hawthorn/Balwyn area. My parents were inner-city dwellers but gradually moved further and further out. They each had a marriage before I came along but I was the only child from my parent’s marriage, so I have a blended family. When they met, my parents each had a daughter called Amanda Jane – that was always tricky to explain to my friends.

Dad was a jazz musician, and Mum was a nurse. I was really close to my Dad and used to spend a lot of time in pubs, clubs and on tour. As a result, I spent a lot of time with adults and grew up in that environment. My Dad was older than most so my friends would often say ‘your Granddad is here to pick you up’.

Two weeks into Year 7, Dad passed away unexpectedly. It rocked my world. High school is for many, a rocky road but this wasn’t a great start. I survived as I found an awesome school called Preshil in my later years, and it was the right fit for me. I had some wonderful teachers that inspire me to this day.

While my peers were working in Maccas, I worked for my Uncle. He ran a travel company, where people could book self-catering accommodation in Europe and really immerse themselves in one place. This was before the likes of online platforms like Airbnb. I was 15 when I started working with my Uncle and left in my early-20s.

My post-graduate studies were in Environmental Science. I never thought travel would be my long-term career. I kind of fell into it. After I completed my Bachelor degree, there wasn’t much work in environmental conservation at the time so I started working for Intrepid Travel. It had just 30 people in a warehouse in Fitzroy then, and it was the kind of workplace where you could bring your dog to work and almost come in your pyjamas.

One day our CEO got back from Africa, and he had been so moved by the book ‘The Weather Makers’ by Tim Flannery, he went out and purchased a copy for every staff member That’s the culture that we were working in. I  worked in operations and reservations, and I also volunteered for the Intrepid Foundation which motivated me to pursue my environmental career again.

Intrepid Travel were and to this day are considered industry trailblazers – they look at the social and environmental impact of their trips and focus on responsible travel. That’s what I have a passion for.

After four years at Intrepid, I left to pursue my Masters of Social Science at RMIT. I had a Bachelor degree that I wasn’t using, and pursuing my Masters allowed me to dabble in environmental planning, climate change and sustainability studies. I actually got work out of this, getting my foot in the door at the Victorian Chamber of Commerce, working with small businesses and sustainability followed by 4 years at the Environment Protection Authority.

I also travelled a lot when I was young, around Australia and to Europe when I was 11- and 12-years-old. My much older sister was living in London then, and when Dad passed away suddenly, Mum knew I needed to see her. Travelling to Europe opened my eyes to the world.

As I got older, I lived to travel – six months travelling through Europe and Africa, three months volunteering in Costa Rica, visiting friends in South Asia and South East Asia at any chance I could get in between.  I have already travelled a fair bit with my young family but hope to one day take them a bit further to some of my favourite places – Spain and India.

Sometimes I think even though the world is so much more accessible than ever before,  people are more risk-averse and the world feels smaller somehow. I hope my children have the opportunity to travel the world and feel safe doing so.

I was travelling through Morocco when I got a call from my stepfather that mum was really ill. It was the longest flight ever, losing my plane ticket on the way but I got back and had six weeks with my Mum before she passed away.

After this, I moved into Yarraville in 2005 with my sister. We had another sister who was living in Yarraville and we had visited her a lot in the seven years prior to this so we knew we liked the area and very soon it felt more like home than anywhere else .

One day in 2010, on a lively night with friends at the Blarney Stone Hotel in the village (now the Railway Hotel), I met Michael. I think when you meet someone at 30, you get that feeling. ‘This is it,’ I thought. It was definitely like that with him. It was comfortable and it wasn’t hard. I could see an awesome future, and within ten months we bought our first home in Eirene Street and our first daughter was born in 2012.

We’ve since kept that as a rental and now live in Kingsville.

Loss was one of the motivating reasons for starting my business. I was just coming back from maternity leave in 2016, and I had been thinking about running my own business. I looked at all the people around me who had passed away and I realised life was too short. You have to do those things you want to do earlier, not wait for it.

I said to Michael ‘How would you feel if I attempted to start my own business?’ I told him I still love travelling, talking about it, doing itineraries, and have been thinking of ways to offer clients exactly what they need. I had heard of mobile travel agents who operated as franchisees with support from a central office and was comfortable with this level of risk if it didn’t work out. I wanted to be realistic and treat this as an experiment in life. Within three months of making that decision, I’d signed a contract and opened my doors for business. 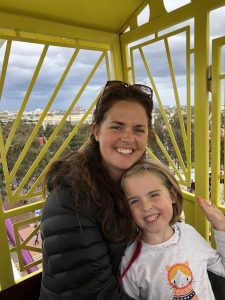 I had initially wanted to see how the business would work through my friends and family network. The goal was to specialise in responsible travel and this is still where my passion lies but I have ended up with more of a focus on a personal approach with my clients than focusing on the type of travel services I can provide I don’t like traditional selling or upselling, however, I do often reflect on the sustainability of this long term. and have tried to think more cleverly about how I operate and become more efficient, without having to up my prices. Running my own business is like an experiment!

I now have a loyal customer base and an amazing referral business. Pretty much from the get-go, I have been flat chat. There really is a market for travel agents, particularly agents who operate on a more personal level. You will always get me and I won’t sell you something you don’t need.

Another big goal I had in business was to learn from and collaborate with like-minded businesses which have led me to two partnerships this year. The first was with Get Bendy Yoga Australia running an amazing yoga retreat in Bali and the second with Little Bali Love running a retreat for Mums. Jemma from Little Bali Love and I met up in late 2017 and chatted about ways we could work together. Little Bali Love is a very popular online guide to Bali with kids and I had all the systems/booking engines to support this. Jemma had always wanted to run a retreat for Mums in Bali and she asked if I would collaborate with her on this. The rest was history. Seven months later we took our first group of Mums to Bali and it was such a success we have another group going in May 2019.

I have realized through all of this is that I like being the engine behind others, to let them grow.

In 2019, my family is taking a six-month holiday. We’re doing a half lap of Australia through WA and NT for a much-deserved break and to again not wait until we are older to do the things we really want to do. I can’t wait to explore the outback, learn more about our wonderful country and disconnect

Running my own business has been – hands down – the busiest and most challenging job I have ever had. I’m never ‘off’. I’m always working compared with working for someone else where you can switch off at times. My goal in the next 12 months is to be a good Mum and partner and find out what I want to be when I grow up.

You can find me anywhere in the cafes locally, but two of my favourites are Woven and Advieh.”