“I was born in 1946 in Shanghai. My mother’s family were half-Chinese, half-Portuguese while my biological father was English. My father was a journalist. They met just before the war. As he was British, he was interned for the duration. After the war, they moved to the Phillippines. I was only a toddler when the marriage broke up. My mother took me to Hong Kong, where quite a number of her family resided. The Communists had come to power in China, and my relatives were leaving Shanghai. However, they had to teach a Chinese person to take over their jobs before they were allowed to leave.

Due to the breakup of her marriage, my mother lost her British citizenship. She was told to remain in Hong Kong for two years before she could apply for citizenship. My childhood was very different after she remarried. We lived near the Peak Tram May Road stop, which was midway. The tram was already a tourist attraction then. I used to take the tram with my friends from May Road to the top and walked to school from there. The tram was full of American tourists, who thought it was amazing that it was public transport. They’d take photos of us standing there in our school uniforms at the tram stops.

We’d ask for 50 cents each for a photo from the tourists, so I felt like a tourist attraction myself! The Americans thought it’s hysterical, and paid me. 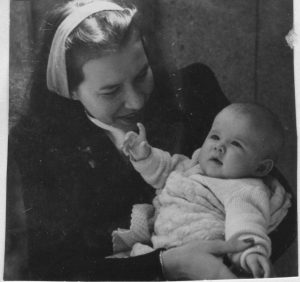 There were a lot of military personnel in Hong Kong due to the Korean War. American ships would come in for a period of time for R&R, and the men were obviously homesick. Life was considered ‘exotic’. When you come out of The Peak tram stop, you were pretty much at the top of the peak. Straight in front there’s a steep hill to some very exclusive houses; it was fantastic.

My friends and I made a gokart, and we’d go racing down that hill. The Peak had less traffic back then. I remember groups of sailors getting off the tram, seeing us on the gokarts, and flipping out. They’d spend a few hours on it, and paid us handsomely as well. Sometimes they’d give us American chewing gum.

We lived in an apartment block, with a community full of kids. There were a couple of boys above us, and another family above them, and we’d have a mailbox system with a basket out the window.

It was a safer world in a way. You’d have breakfast in the holidays, and race out the door.

I was 12 when I left Hong Kong. My stepfather was the manager for a British shipping company. It was made clear to him that he wouldn’t be promoted as his wife was Eurasian. By this stage, they had two children, so I had a little brother and sister.

Secondary schooling was not great in Hong Kong. Generally, you get sent away to boarding school. Mum felt, so soon after my brother was born, that it would make me feel like I was being sent away. She had the sensitivity to realise that. We went to visit relatives in England and Australia, and also to check out boarding schools.

Mum didn’t have a good time in England. In Dad’s hometown, which is a small town outside Cardiff, Mum was considered exotic. She felt patronized by his family and their circle, and I’d always called’ Virginia’s daughter.’ They never accepted my stepfather was my Dad. 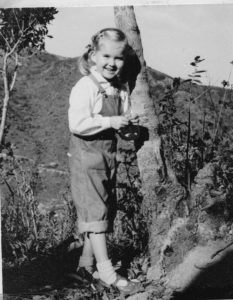 4yo Shirley in Hong Kong

She decided not to live in England, and felt more accepted in Australia. We packed up and moved to Melbourne. Why Melbourne? One of Dad’s brothers lived in country VIC, so there was a connection. They liked Melbourne when we were here. As we came by ship, it was the monsoon season. Longhaul flights weren’t available, so ships would be nicer, and kids could play. There were many delightful ports of call, and the trip took over a month. When we got to Melbourne, Mum thought ‘That’s it. We’re not travelling any further.’

That was 1959, and they bought our first home in Balwyn.

Dad got a job through connections with the shipping company. In those days, the local fruiterer didn’t stock exotic stuff like capsicums and you’d have to order it. We would travel by tram to Little Bourke Street to buy fruit and vegetables that she knew from Hong Kong. She’d always have lunch there, and have dimsum. Balwyn, like many suburbs, had a Chinese restaurant but they served a small menu such as fried rice, sweet and sour pork –  and steak with eggs.

I went to Genazzano Convent in Kew, but was unhappy there. In Hong Kong, summer uniform was a white cotton dress, buttoned-down in the front, and sandals. In winter, we wore just a light grey tunic and a shirt. It was very light. Here in the convent in 1959, winter uniform was a shirt with a stiff collar that gave me blisters on my first day, a tie, a tunic with a belt, a blazer, a hat, and stockings. It felt like prison.

Australians had not ‘discovered’ Hong Kong yet, and there was a lot of ignorance. The girls at school passed disparaging remarks based on how I look. When I was in Year 12, Mum passed away, and it was a bleak time. It changed my life dramatically, with my sister was in Grade 1 and brother in Grade 2. Dad couldn’t deal with the death of his wife, so I did everything.

I got accepted in Melbourne Uni at the first intake, doing arts. Stepdad said I couldn’t study, as I had to take care of the kids. I remember having this determination about survival, and would be lost if I had stayed home. I told Dad ‘I am 17, and I’m not going to do this.’ I went to Melbourne Uni, and juggled my lectures and tutorials around my siblings’ school time. I would collect them from school, and went to evening classes. 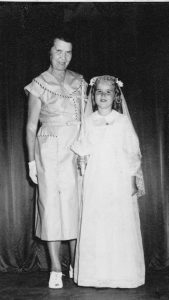 Shirley and Grandma – her first communion

I changed to Burwood Teacher’s College (now Deakin Uni), and trained to teach at primary level. It was a great three years, and I fell into theatre and school productions. I remembered wandering into auditions in my first year, and the lecturer who was directing, asked me if I could do an Irish accent. I couldn’t, but I bluffed my way through, and got a role.

I got married in 1967 at aged 20, and have two kids. I kept teaching in the Kew area, but kept performing in local groups.

In 1995, we separated, and I rented a place in North Fitzroy. I felt liberated for the first time in my life, and could make my own decisions. I bought a house in East Coburg, and it was a bit of a shell of  a place. My son Jason and I slowly did the property up.

In the 1990s, I was asked to join the board of a professional theatre company called TheatreWorks. They were based in the East previously, but relocated to St Kilda. For two years I was their publicist and found my teaching skills coming in handy, as I did very innovative media releases. Unfortunately, the funding was not renewed after two years, and I went back to teaching in Canterbury Primary School.

It was the Kennet era then, and teaching became stressful. He had kindly offered packages for teachers to leave teaching, and as my kids had left home by then and I was on my own, I decided to leave teaching.

I did some educational consulting, and worked for the Victorian Electoral Commission. One day I went with a friend to Werribee Zoo, and was sitting on the bus. I looked at my friend and said I think I could do this job. I love animals and loved the idea of being a guide. 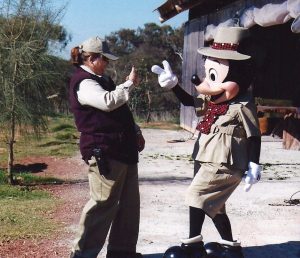 Shirley the safari guide and a passenger

The next day, I rang the zoo, and asked to speak with the safari guide supervisor. I got put through, and the lady said ‘You will not believe this, but I was about to recruit more guides.’ I went for an interview and soon found myself in a truck, getting my heavy rigid license.

It was the best way to celebrate my 50th birthday. I was a safari guide for eight years.  A few years later the zoo publicist took a six-month leave, and I filled in for her.

Week one of my role, the first white rhinoceros was born in the Southern Hemisphere. The Director of the zoo said I had to do a media conference. I decided to do it on the camping site of the zoo, as it was a new ground. We had it there, overlooking the savannah on which this momentous thing had happened.

About 18 years ago, I visited Williamstown Little Theatre (WLT), and was impressed with the standard of the production values. I auditioned for a play, and ended up doing a few plays, and also directed. I always juggled my time between theatre and the zoo and elections.

The day the white rhino was born, I was rushing to the theatre. The weather had changed on the day, and there were fears for the baby rhino. I got to interval and had no recollection of what doing the first half – my brain was at the zoo. 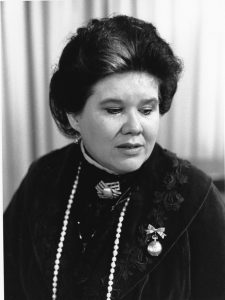 In 2009, someone from the WLT committee asked if I wanted to stand for committee. I was sure I could offer some help with clerical work. I arrived at the AGM, and realized I had actually been nominated as the Secretary. It’s not a job you handball easily, and it’s a very big job. However, I enjoy it. I still have the space to direct, to act and do costumes, props and other things.  Because there are fewer good roles for a 73-year-old woman, I can still participate in different ways, and it’s enriching.

In 2011, I moved to South Kingsville. I remember the settlement day was 11th November, 2011. The solicitor is Cantonese, and she wanted to get an 11am settlement time for good fortune. Of course, on 11/11, at 11am, which we didn’t get unfortunately. My house in East Coburg required a lot of maintenance, as it was part of the old soldier settlement after the Second World War. It was at the stage where the weatherboards needed replacing, and while I enjoyed the big garden and gardening, it was getting a bit much for me. I decided to move while it was still an adventure, before it’s a forced decision.

I was looking for the house, not the area, but was also mindful of travel to WLT. The agent who pointed me to the house is John Galea, who is now at Jas Stephens. He was the first agent to listen to what I wanted. I remember going through the house, and realized all my furniture would fit, and put in a bid. Amazingly, I got it!

Living in South Kingsville is awesome, but it does mean I’m at WLT a lot more! 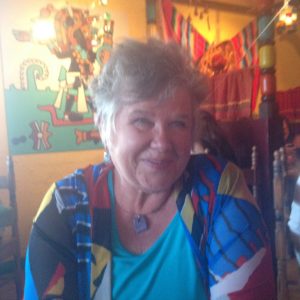 I do a lot of ‘weekend‘ stuff on weekdays, as I am retired. I enjoy my gardening and walking my dog. I sew, I knit, I do felting, and I’m staring mosaic. There are a few cafes I like, including Duchess of Spotswood, and Cupcake Queens in Williamstown.

In 2020, I would like to have more time for myself, and do more creative stuff on a personal level. I’m not directing these two years, so that gives me a window of opportunity.”