Vicky and Katie: “Glee West is the offshoot of the parent organization Glee Club. It’s a choir you don’t have to commit to. There’s no need to sign up, no uniforms, no practice; all of those things aren’t there. What’s important is everyone just gets together and has a big sing.

Glee Club has been around for 14 years, while Glee West is only two months old.

It’s great for community-building, individual mental health and joy and it’s really fun. That’s what Glee Club is all about. Choir without the boring stuff, and you can have a drink while you sing!” 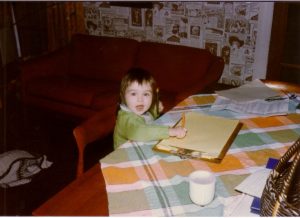 Vicky: “I was born in Kew, but moved to Ballarat with my family when I was nine. Dad was a lawyer, and Mum is – and still is – an architect. Dad has passed away. Growing up in Ballarat presented incredible opportunities for me to perform in theatre, choirs and bands. I filled my teen years with music.

I have one sister and was really outgoing as a kid. I was probably one of those kids who was older than my years; my weekend jobs consisted of playing the piano for dance schools and callisthenics colleges, earning $10 per hour. I always felt rich! I felt I was already on my path. I couldn’t figure out how I could make music happen for me, and uni felt like the natural path. Little did I know playing rehearsals and gigs was teaching me the skills that I really wanted and needed and turned out to be more useful to me than my time at university.

I started teaching piano at 16. When I moved to Melbourne at the end of school, teaching the piano became a part-time job and paid for my uni. I only stopped teaching when I went on tour with Jersey Boys and have been working solely as a performing musician for well over a decade now. 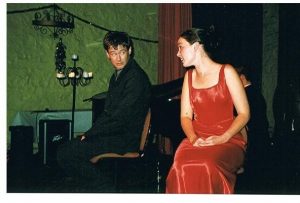 Vicky performing as a 19 year old.

My husband Mick is a sound engineer. We married in Port Melbourne sixteen years ago and were looking for a home. We found an incredible Fish & Chip shop in West Footscray. What used to be the shop is now my studio, and we just love living there. The demographics in the area have really changed over the last decade or so but it still has the old school charm. We love living here with our six-year-old daughter and you won’t catch us leaving any time soon!

At the moment, I’m the Assistant Musical Director on a show called Come From Away in the city which is just smashing records for audience attendances. It’s a huge hit. I conduct the show three or four times a week and help keep the music of the show strong. On top of that, I do vocal coaching and prepare professional singers for auditions. All that, plus Glee Club.

When you work as a professional musician, people often say ‘You’ve got such a cool job.’ I think it’s true, and I love my job. Lots of people were telling me they’d love to have more music in their lives but couldn’t figure out how to fit it in. We are all so busy and committing to a choir seems like another thing on your to-do list. That got me thinking ‘Is there a way to have a choir without the stress or burden that choirs sometimes bring?’

On location at The Today Show

That’s when Glee Club started. While there are a lot of singing groups in Melbourne, some people are looking for a different style of singing group. I always say there’s a choir for everyone who loves to sing – you’ve just got to find your fit! When I started Glee Club in the city, that was before social media. So we really started through genuine word-of-mouth: people telling their friends and then bringing them along. 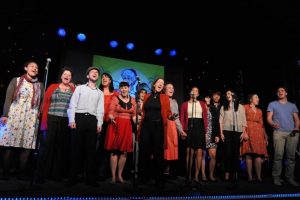 People want to share the fun they’re having! Glee Club just goes for an hour – we do a big vocal warm-up and then sing three pop songs. The kinds of songs that everyone at least sort-of knows!  We have a giggle and everyone leaves on a huge high. It’s super fun!

On my weekends, which is a Monday, I go on a bubble tea mission. I have a bubble tea obsession and want to find the best bubble tea in Melbourne. I currently have two in contention. Moo Brew, hidden in Paramount Centre, is off-the-charts good. At Industry Beans in Little Collins, you can get a cold brew bubble tea, with condensed milk in it, with home-made tapioca pearls.” 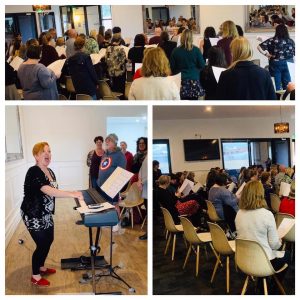 Vicky: “It’s so good but it does get expensive if you have kids and they want it all the time!”

Katie: “I was born into a musical family just outside London. Both my parents didn’t want all three kids as musicians as they were musicians too. Mum was a double bass player, and Dad, a violinist. Dad has since passed away, and Mum has moved to Louisiana in the United States and is currently a sound engineer. Mum was a double bass player for the English National Opera and had met Dad there. Dad had previously worked with Frank Sinatra and the Beatles.

My earliest memory was music. There was always music in the house. I’m the youngest and would hear my brother and sister practising. I think my parents held out, hoping I would be a non-musician. The day I said to them ‘I want to play the trumpet’ they were like ‘No!’ 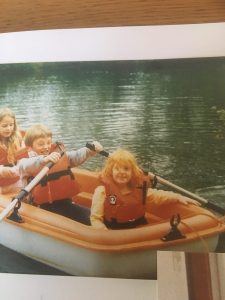 I was really obsessed with the French Horn as a kid. I would practice for hours daily and got really good. I went to music school in London and to the Royal Academy of Music for four years. I was working in a lot of orchestras and while I was at the academy discovered I had a passion for singing. A lot of my friends were jazz musicians and I started getting into jazz theory and improvisation.

When I left the academy in 2003, I got a job as the principal horn at KwaZulu-Natal Philharmonic Orchestra, a professional orchestra in Durban, South Africa. It was my first salaried job out of college. I was 20 then and stayed there for two years.

I missed home and returned to London in 2005. I started a freelance career as a French Horn player and singer and also began teaching in masterclasses. Along the way, I became a singing coach as well.

I have a love for cabaret and am a burlesque artist. It’s something I really enjoy. I’ve done two runs of shows at the Butterfly Club; the first was about pregnancy when I was heavily pregnant at eight-and-a-half months. The next show I did, after birth, was about anxiety, at the end of 2018.

When you start something as intense as music, you need to look elsewhere and challenge yourself. For years I was playing orchestral french horn. To be honest, I was getting anxious about having to produce the same level of goods every day and wanted to have a wider outlook on my musical abilities. Jazz really helped, as did pop music. It’s not every day you play with Robbie Williams and Elton John! 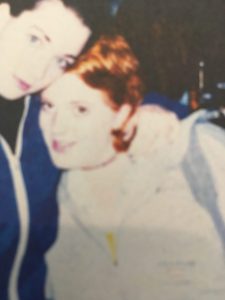 Being a freelancer in London is very hard work. It’s a really busy lifestyle. When I had a baby in 2016, I had to go back to work four months after he was born and that was for a tour with Burt Bacharach. I was breastfeeding on the breaks, and even though I really loved music, I didn’t love all the stuff around it. I wanted to focus entirely on my son. Music is a wonderful job, but it is all-encompassing.

I decided to take stock of my life. My husband Ben is Australian and has lived in Melbourne for most of his adult life. We visited Melbourne in 2016 and had such a great time. Ben has a lot of connections with his work and we thought life is more than just doing the same thing all the time. We decided to shake it up so Ben could be nearer to his family.

I have always loved Melbourne. It’s so vibrant, and always has nine or ten things happening. London has a lot of competition and is a City of no. Melbourne seems to say yes a lot more. It’s a big city with much fewer people and has more space to run around. I say this to a lot of my Melbournian friends.

So in 2017, Ben and I moved to Melbourne. Looking for a place to live, a few of Ben’s friends suggested Kingsville as it’s a nice area. We now have a rental in Yarraville. 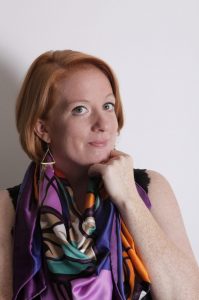 The Katie you now know

The first thing I love about the inner west is it’s so close to the city centre. I miss the hustle and bustle of London, but to be able to get to the CBD quickly is a big win for me. You could never do that in London. It’s always 45 minutes on the train.

There’s a diversity of people in the Inner West who make me feel at home. I love the community spirit, and you don’t get that in London. When I first got here, people were saying hello to me. People don’t do that in London.

When the idea of Glee West came up, we thought ‘Let’s launch a group and put it up on the Inner West social media pages. We were really surprised by the interest, and thankfully the room we’ve hired at the Victoria Hotel could easily sit 100 people!

I had taken my kids to the Victoria Hotel a year or so ago as it is an oasis for kids. I have a small business called Concerteenies which produces concerts especially aimed at kids and their carers and we have been presenting performances at the Vic. When I asked the team there if they were interested in a choir they were all for it! 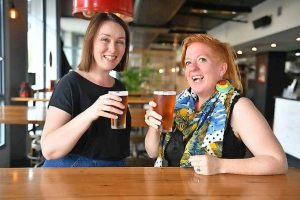 Glee Club is wonderful for people who lead busy lives: people with busy jobs or young families. A lot of people in this area are creative – we’ve got a great mix of people who’ve sung lots and beginners who are just taking their first plunge into singing but we always seem to make a fantastic sound as a group. The Inner West can really sing!”