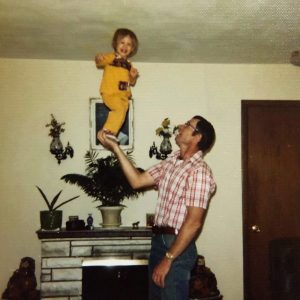 3yo Wendy with Dad

“I was born in Grand Forks, North Dakota. My mum’s originally from Hong Kong, and my dad’s from North Dakota. They met when my dad was travelling. Two years later she came over and they got married. I am the youngest of four. My half-siblings are much older than me as they are from my mum’s first marriage. The paperwork took a while but they came to the states from HK when I was about 5 years old. They were all 18 and over by then but Mum worried about China eventually taking back HK and wanted her children safe away from that – very glad she did. My sisters stayed in Grand Forks for a couple of years before moving to California but my brother stayed until I was a teenager before eventually moving there too.

I was a quiet child growing up but started to find my voice in high school. Mum didn’t teach me Cantonese but brought me up the Chinese way as much as she felt she could. She had a very difficult life growing up – nothing most people could imagine. If you’ve ever read Wild Swans by Jung Chang you’d understand. Her story could easily have been in that book. She was separated from her family when she was a young child, and mistreated by the family she worked for in China, until the neighbours decided to intervene and helped her find her mum. 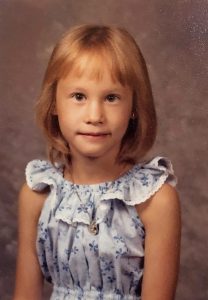 Back then my parents didn’t think it was important to teach me Cantonese but I wished my mum had. Things got lost in translation, and we couldn’t have deep conversations. Also she would speak to my older siblings in Cantonese, and I’d get ignored and spoken about a lot rather than spoken to. I resented her for a long time by translating that feeling as rejection, seeing me as more my dad’s child than hers, but now I understand.

When I grew up she told me once while choking back the tears, it’s too bad that we could never be close. It stung like you wouldn’t believe, but she was being honest. I know she has her regrets.

As a ‘halfie’, who looks Caucasian, I flew under the radar mostly. However, I do vividly remember walking to school when I was young and being teased because my mother wasn’t white. As an adult after I got married to my husband, Nick, I was showing some friends a photo of us with my family and one of them started laughing her ass off – the picture didn’t look right to her. I felt really upset, and insulted. No one should have to feel that way simply because you are part of a mixed-race family. To me it’s something to be proud of.

I walk around as a privileged white woman every day though and rarely experience racism. I have my own biases to work on as well – as we all do.

My mum was a seen and not be heard kind of parent and would get very angry. The wooden spoon would come out of the drawer and I took a lot of beatings. I still remember the sound of that drawer opening when she’d rush to get it. If I had the chance I would run to the bathroom and lock myself in. However, I couldn’t hold her off forever. The door had to open eventually so I cowered in the corner while she beat me. Most of the time I didn’t know what I’d done wrong. My dad also had a bad temper and would hit me too. My half-sister who’s 13 years older than me tried to protect me once and was hit instead. She was in pain – they were powerful blows.

As I got older I couldn’t take it anymore. I got bigger and stood up for myself. I’d take whatever she was hitting me with out of her hands. Once I pushed my dad back after he hit me in the face. I ran out of the house and drove to a friend’s house for safety. He stopped after that.

All that built up fear and anger turned me into a wild teenager. I was doing things my way after that. I had great friends at high school though and we had a blast. They didn’t know it but they got me through those years. Before that I was counting the days until I could leave. But leave I did.

Although my parents could be volatile they did love me. Mum would always make sure I was well fed and every so often we’d get a good laugh in too. My dad enjoyed taking me bike riding and camping. I have fond memories of riding bikes everywhere with him. It instilled a love of nature in me and I decided I wanted to be in the mountains so I moved to Montana to study at the University of Montana in Missoula. 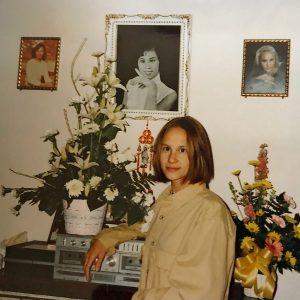 20yo Wendy with mum in the background

Growing up had its ups and downs but overall I had a family who loved me. So growing up definitely had it’s difficulties, which has caused a strained relationship over the years but things have improved, especially now that they are elderly. Having photos like the ones here are a lovely reminder there were good days too. I can still remember my dad balancing me on his hand like that – I loved it. Without this photo, I would’ve forgotten completely.

One thing I was lucky enough to have while growing up was a nice big backyard to play in and my dad built an amazing playhouse there. I remember when I was about eight or so I stole some little toys and knick-knacks from stores and then sold them to the neighbourhood kids at my “shop”. Thankfully, that’s as far as my life of crime went.

At Uni in Montana I majored in Humanities and minored in Asian studies. I also did a photography course and loved it. As I minored in Asian studies, Mandarin was part of my coursework so I went to China on an exchange program, and lived in Hangzhou. That’s where I met my ex-husband. He was from Perth, and I came here on a holiday with him.

I remained in Perth for a while, and then completed my degree. Later I returned to China and taught English. After returning to Australia we decided to move to Melbourne.

Truth is, we had nothing in common. What kept us together was the fact that we both studied in China – that was it really. He’d always struggled to find employment and then finally got a job as a Customs Officer. That position of authority changed him. When he got the role, he told me to start ironing his shirts etc, and spoke to me with authority. Well, that was the straw that broke the camel’s back. I was busy with my own life working full-time and studying so I put on my walking boots and walked out the door, but not after buying him out of our property in Yarraville. 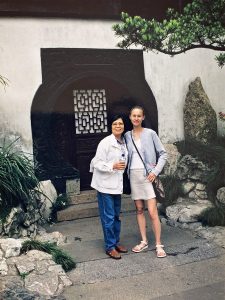 20-something Wendy with mum, in Shanghai

After I divorced I joined the RMIT Outdoors Club. Back when I was pursuing my Bachelors in Montana, I did a lot of outdoors activities, including snowboarding, rock climbing and hiking. I wanted to go back to doing things I loved.

It didn’t take me long to make new friends in the club, and found things in common with lots of people. I still have wonderful long lasting friendships with people I met there. That’s also how I met my husband Nick – on a fateful mountain biking trip. From there we started climbing together and well 13 years and two kids later we’re still trying to have adventures together when we can. 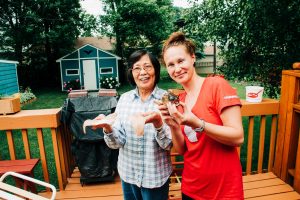 30-something Wendy with mum, in the backyard

I studied photography at RMIT and received a Diploma of Applied Photography. I learned all aspects of lighting, fashion, food, portraiture, product and also loved photographing landscapes since I am a lover of the outdoors and was out on various adventures nearly every weekend. Life changed a bit (ok a lot) after my boys were born and that’s when I truly fell in love with portraiture. I really enjoy bringing a natural and organic element of the outdoors into my images while also bringing out the love and character of people. It’s now my mission to create authentic images for people and businesses who care about family, love, community, humanity and the planet. 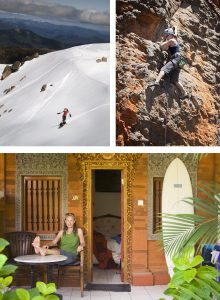 30-something Wendy and outdoors

In 2010, Nick and I purchased a house along Francis Street and renovated it before selling it. Our current home is also in Yarraville, and we love the house. It has lots of space, and didn’t require renovation. Once you’ve renovated a house, you don’t really want to do it again or at least we didn’t.

Why Yarraville? I was working in South Melbourne, and renting in Kew. Everything was really expensive, and another woman in the office had purchased a home in Spotswood. She told to me to look out West. I was still exploring the suburbs, and was told Yarraville wasn’t too busy and was ‘nice’. I came over to check out the suburb, and was pleasantly surprised how it had such a lovely village feel to it.

Before I started my photography business I worked for a mental health charity – as a digital content manager. I really enjoyed being part of an organisation that was doing good things and giving a voice to those who needed it. I was employed there for 14 years. For 12 of those years the woman I worked for was someone I adored; a true matriarch and genuinely kind person. When she retired, the replacement was none of those things. He was far from it. The organisation changed and I was made redundant while I was on maternity leave with my second child. When I expressed my disappointment I was met with ‘Oh, so you wanted to come back to work?’ 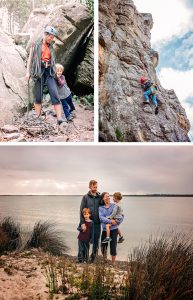 Wendy and her family

To be let go this way after so many years, really upset me and to top it off they offered me next to nothing. After negotiating that roller coaster I decided to focus on my photography business.

My second child was born in 2015, and my business officially started in 2016. I’ve always loved photography and do both family / newborn and branding / commercial projects, but also found interest in telling stories of women who have been treated unfairly at work.

I wanted to photograph them, and tell those stories. Not long after, I started a project called Women Who Fight With Grace (WWFWG), as a side project. My amazing former boss, Barbara had since passed away from cancer. I named the WWFWG project in honour of her as that’s how I saw her. 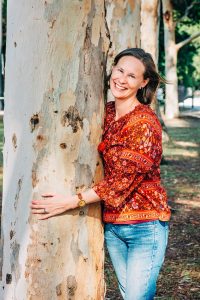 Wendy getting up close with nature!

I still have my youngest at home with me. I want to enjoy that as much as possible before he heads off to school. It’s a challenging balance of not being overwhelmed with work, and spending enough time with him which any parent would understand during this unprecedented time dealing with Covid-19 lockdowns. Goals-wise, I just want to keep doing what I’m doing – capturing meaningful family moments and continuing to work with organisations and businesses who value people and planet.

I love Yarraville. I love the street I’m in. It has beautiful trees, and so convenient. I love being able to walk the kids to school, and I love the neighbours. Being American, I miss Halloween and it’s good to see the local community really getting into it annually. The kids love it, and I appreciate it. It brings our community together.”