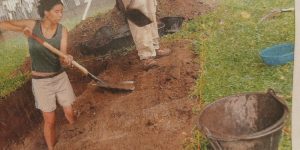 “I came here as an international student from Singapore in 2004, pursuing Anthropology and Social Theory in Melbourne Uni. I had volunteered for a dig in Singapore’s St Andrew’s Cathedral. It was really cool, we dug up 14th-century Chinese pottery and discovered coins from the Arabian Peninsula. I met a few anthropologists at that dig and got really inspired.

Singapore continuously changes, and whenever I visit, I’m still surprised at the changes. All the malls look the same, but at the cost of Singapore’s history. The removal of the old Singapore National Library affected me deeply.

I’ve been lucky. I’m the oldest of three siblings, and both my parents were bankers – Dad was an investment banker and Mum, a private banker. Mum has quite a reputation within the banking industry. I never knew what she did, and I remember my Commerce friends would tell me Mum’s terrifying. ‘She’s the Dragon Lady’, they’d say. Mum’s very calculated, even when I was growing up. We don’t have a typical Asian family dynamics; I never had shouting matches with her as they were very calm debates. There was a lot of reverse psychology and reasoning from Mum. 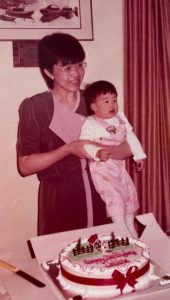 Mum and Dad travelled a lot for work, so I grew up in London as a toddler, completed my primary school at Singapore International School in Hong Kong, before returning to Singapore to complete my Junior College (pre-uni).

Why did I come to Melbourne? My first choice was always a university in the UK. My younger brother was, by Singapore standards, troublesome. Mum had sent him to boarding school in Melbourne, and she thought I might as well be sent to Melbourne too. University in the UK was more expensive than in Australia, and that swayed Mum’s decision to send me here.

When I finished uni, I took a gap year in 2007 and returned to Singapore for family reasons. I worked as a research assistant in the local uni, and picked up ongoing work as a waitress/kitchen staff at an establishment called Food for Thought. The head chef David shared his story with me and told me he was studied and worked part-time as a butcher in Sydney before ending up in the kitchen to pursue his culinary dreams. David, along with his business partners who were tutors, had realised their dream to open a cafe where the profits were used to subsidise tuition fees for students with financial difficulties.

David inspired me to consider going to cooking school, and in 2008 I returned to Melbourne to finish my Honours in Anthropology, while I continued working in cafes. I did quite well in my Honours, and the supervisor asked if I wanted to pursue my Masters, as they had liked my thesis. 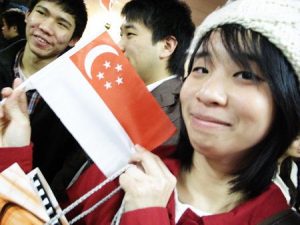 I said no, as I had decided to spend a year in cooking school. Mostly to see if it was viable, and to see if I was good at it. There’s a lot of other stuff that comes with being an Asian female in the kitchen a decade ago. It’s a bit better now, but that’s another story altogether. Another rabbit hole.

I enjoyed cooking school and began working in fine dining in the CBD. One day, I got asked to help set up the Reading Room Café at Victoria Uni. The original owner and I were acquaintances, and they were looking for a chef. I jumped at the opportunity. I didn’t know a lot about management, so I took up a stint at St Ali’s café in South Melbourne. That was an important time of my life as I met a lot of chefs and fellow peers, many of whom I’ve kept in touch with. One of them eventually opened The Grain Store in the CBD, where I was part of the opening team.

I worked at The Grain Store for three years, before opening Jack B. Nimble in Maidstone with my husband and two friends.

Why Jack B. Nimble? We wanted something child and family-friendly, and also something nostalgic without the hipster element. Which is funny, as local food blogger Kenny Weir called it ‘hipster’ in 2015. The food was somewhat British and small goods-inspired, a nod to our colonial history. The four original owners are of Singaporean/Malaysian Chinese descent.

Food reviews in Australia are a sore point for me. None of the Good Food judges are of Asian descent, and Asian food has become such a popular cuisine. Cuisine is like language and culture; it changes and doesn’t stay stagnant. Something from China that arrived 20 or 30 years ago, has changed and is now considered Australian-Chinese food. You can’t find this food in China. Cultures adapt their food to what’s available in the country.

A good example is chicken rice from Hainan. If you look at South-East Asia, there are so many different types of chicken rice. Singaporeans use more ginger, Vietnamese use Vietnamese mint, Thais use sweet chilli, but people all say it’s authentic. What is authenticity? It’s hard to make people understand, that original is not always the best.

I met my husband Julien in Melbourne, and we were married in Singapore. When we returned to Melbourne in 2013, we moved to Maidstone. Why Maidstone? At first, we were looking for rentals in the North, as the South-East was too expensive. We knew a few people living in Footscray and found a house just opposite the old bakery, which is now Jack B. Nimble.

The landlord wanted the house back after a while, and we moved to Sunshine West, before eventually purchasing our Yarraville home in 2016.

We’ve always enjoyed coffee, and for the longest time in 2014 and 2015, we would drive around the West, looking for the ideal spot. We looked at what is now Brother Nancy, but we were always drawn back to the strip in Maidstone. No one believed us when we wanted to set up a café. There was no foot traffic, but there was a park across the road. We believed in making good food and coffee, and we believed in our project. 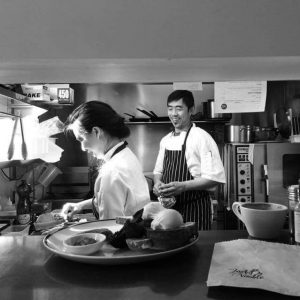 By the start of 2018, after having JBN for over 2 years, I had become interested in other things. Julien and I decided by mid-2018 that it was time to move on, and we began doing a few classes in Braybrook Community Hub for new immigrants and mothers. I’ve always been quite passionate about nutrition, and I realised this was something I could do, but only if I had more time and accreditation.

I’m currently working at Pod Café in West Footscray, owned by Jess and Fiona. When they heard I was leaving left Jack B. Nimble, Jess approached me. I’m the second chef there, alongside Jess, and an apprentice, Jodie. It’s a small kitchen. I really like what they’re doing. The food is simple, it’s sustainable, the entire kitchen is solar-powered, and our veg scraps are used for compost and rabbit food. Jams and relishes are made in-house, and the kitchen is even rented out to a local bee-keeper who uses it to jar his honey.

Pod Café has built a community in West Footscray. It’s nothing flash, just honest and tasty food. I love social media. It’s a great tool, but a lot of cafes fall victims to it, giving people what they want instead of offering something different.

A lot of cafes do the Instagram thing and sacrifice the taste in the process. People misunderstand me when I say I don’t like social media, but you shouldn’t create stories for the sake of creating a story. You should create a story because it’s worth sharing. The word authenticity is so bastardised these days. I hate saying it, but it’s so true.

I’ve always liked Yarraville. My parents love it too. They liked what they saw when they had the chance to check out the suburb while they were visiting. The community is really welcoming, and we never felt like immigrants. I never feel like an outsider in the West. There’s such a strong community spirit. I’ve stayed in Carlton, Rosanna, the CBD and the West, but I’ve never felt more welcome than I am here.

My parents are happy with my career. I’m lucky they never expected me to become a doctor. Mum never put any pressure on me to, I could do what I wanted. As long as I had good grades, and am a good person, that’s all that matters.

In my free time, I love reading, and am now pursuing a post-grad Diploma in Nutrition.”