Resident of Yarraville, CEO and Founder of Disability Tek 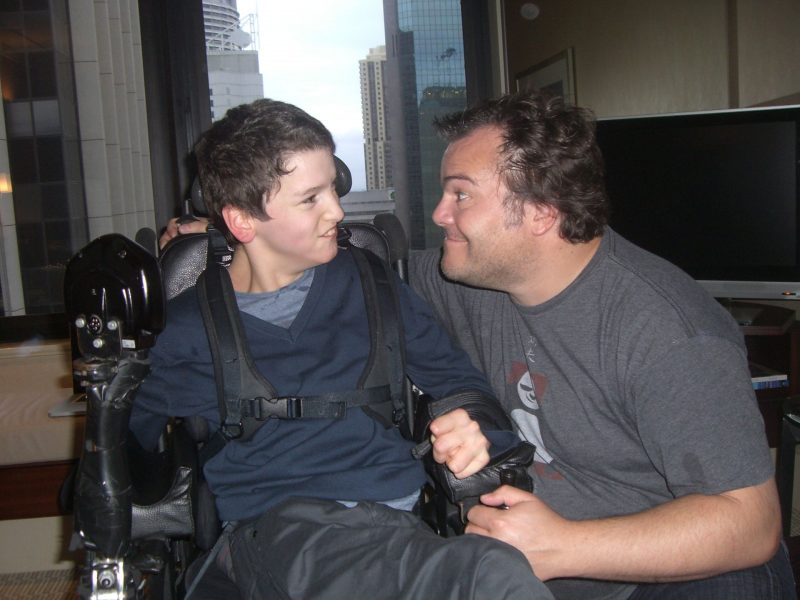 I was born in 1997 with athetoid cerebral palsy. My parents – Anna and Des – are both school teachers, and when an opportunity arose for them to move to Japan to teach English, they jumped at it. Mum and Dad knew my mobility would be more of an issue as I got older and it’s one of the big reasons why we went there as we got to travel.

I went to a regular Japanese school, and although I am unable to vocalise my words, I picked up a lot of Japanese. One of the benefits of being in Japan at this time was how they embraced the Internet early and I was lucky enough to adapt to it. I became quite proficient at using a computer and accessing the Internet.

In Japan, I was fortunate to be in a supportive health care system. Even in my kindergarten years, I was put into an Early Intervention Program as it was considered the sooner physical and cognitive intervention occurred the better I would be. I got to be in a stimulating environment from an early age. I would come home at the end of the day completely exhausted as my days were so full.

I then went to a regular Japanese primary school where I received a lot of support. There were only a couple of other kids with disabilities there and yes, we were friends, but I also loved being in a regular school with able-bodied kids. I just wanted to be like everyone else.

My family loved Japan, and we could have stayed longer. However, my older brother, Baxter, was heading into high school and my parents figured if we didn’t get back soon, it would be difficult making the transition.

While we were away, Mum and Dad bought our current house in Yarraville. This was in 2000 when Domain.com and Realestate.com were just becoming relevant. When we returned, we rented in Williamstown while the house was being renovated and made more accessible to me.

On our return to Australia I moved to Glenroy Specialist School (part of Yooralla) but after the first year, it was decided by my teachers and therapists that going to a regular school would be better for me. I started attending Williamstown Primary School, I loved it there and the kids and teachers were great, then I moved on to Williamstown High.

I am very much a self-learner. I discovered Youtube early, and in 2007 created my own channel 28 Games. I used it as a platform to show people how to do tech stuff, play games and create special effects such as fire. One of the things I enjoyed doing most was making karaoke videos where I would lip-sync songs. This was the beginning of me reaching out to people via technology.

I became more and more interested in technology, particularly anything that enabled me to communicate with people. One of the biggest technology wins for me has been Facebook. It has provided me with a platform to communicate and connect with friends and family, especially when I was at Willy High. Willy High is a great school with friendly kids and supportive teachers and I never had any issues, I was also blessed to have incredible integration aids who worked so hard and helped me to achieve my goals.

Once, I was asked to make a wish by the Starlight Foundation. Most people would ask for a trip to Disneyland, but I decided I wanted to meet someone. At that point, I was a fan of the movie School of Rock and actor Jack Black really intrigued me. I asked if I could meet with Jack; it was perfect timing as he was coming to Australia to promote the movie Kung Fu Panda 2.

Turns out, Jack Black is a mad AC/DC fan and was very generous with his time. He spent about 30 minutes with me and came in singing and dancing, including songs from AC/DC. I also got to experience what it was like to be on the red carpet.

In December 2017 I had an amazing meet-and-greet with Steve Wozniak, co-founder of Apple Inc. I wasn’t well that day, as I had just gotten out of surgery the day before. However, it was too big an opportunity to miss out on so I went nonetheless and I am so glad that I did.

In November 2015, I wrote a letter to current Apple Inc. CEO, Tim Cook. I explained how much I loved Apple technology but was concerned about how the move to swipe technology was going to lock someone like me who is quadriplegic out of the Apple tech world. I never heard directly back from Tim, but there were a few people on Apple forums who told me there was no doubt my letter was read.

Every year in June, Apple Inc uses the Worldwide Development Conference (WWDC) to showcase their latest technology and software for developers. However, in 2016 they didn’t focus on a tangible product. Rather, they focused on tech accessibility for people with disability. Tim Cook came out and said he was so proud to offer Apple technology that is accessible to everyone. I have no doubt that my letter to him had a part to play in Apple rethinking what Apple Inc represented and it triggered the momentum necessary for them to consider the direction of their technology and how it may affect a user who has a disability. 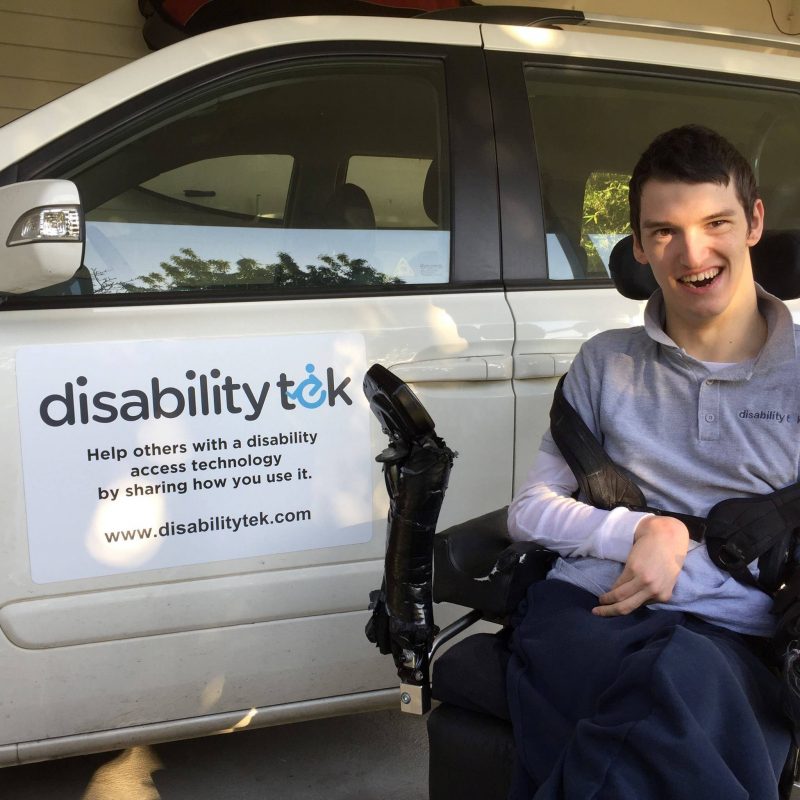 When I wrote the letter, I mentioned my on-screen keyboard program which is made by AssistiveWare. I know Tim Cook took time out of his busy schedule to visit Assistiveware’s Amsterdam office not long after my letter was written as he tweeted about the visit. Today Apple Inc works closely with Assistiveware to ensure that all their products are compatible and accessible for people with a disability who use their software.

From that point, I started realising I have a voice. I could create change and advocate for it. I have always been interested in technology and the power it generates for someone with a disability. Technology can change someone’s life – it has the capacity to create independence, connectivity and empowers a disabled person within their community. I started to think about what else I could do.

I have since created Disability Tek. It is a platform for sharing and learning about assistive technology. The website has only been up and running since late 2017 but is already being well received. More people are visiting the site every day and many are returning which demonstrates that I have definitely identified a pain point that needed solving.

One of the things I want people with disabilities to do is create their own User Set Up on the site including pictures. This allows for us as a community to share our own assistive tech experiences and it is a great way to help others and learn from each other. Someone who faces similar physical challenges may be able to use a similar setup and/or build on it.

It is also a great opportunity for tech companies who develop the technology to see what works and what doesn’t, as users also have the opportunity to add the advantages and disadvantages of their current tech set up on the site.

At the moment the most popular component of the site is the news section. In it, I highlight specific technologies or updates, and I alert people to them. Sometimes, I focus on a personal story, or an organisation doing important things in the assistive tech sector.

I am just about to trial EyeGaze technology, an eye-operated communication and control system. On my first attempt, the therapist said it would take a lot of time to get used to, but I got into it really quickly. Having access to EyeGaze will improve my ability to communicate and take it to a new level.

For example, when I finish a presentation at the moment, and people have got questions it takes me way too long to answer because I have to type my response first. With EyeGaze, it will be much quicker, the only hurdle as with anything related to disability is the cost.

Disability Tek’s unique value proposition is that it is growing organically to be a one-stop platform for information about all assistive technology. Information about assistive tech is currently scattered. Tech companies tend to promote only their own products on their websites which makes it hard to get a good understanding of the big picture in what is available.

Often people with disabilities need to cobble together various products from various sources in order to get what they need. You may require software from one company but hardware from another. This takes time, trial and error and can be costly. Disability Tek wants to alleviate these issues.

I know the importance of having technology that is the right fit. For a short time when I started driving a motorised wheelchair, I had to use head control and I hated it. Later I moved to a joystick and it was so much easier. It drove me nuts clicking my head to get around; the switch to joystick made all the difference in the world.

Using the joystick allows me to use a computer as well.
Way before assistive products like Google Home and Alexa came on the market, I was and still do access software via my wheelchair to control my own TV. Being able to turn your own TV on and change channels is a little thing to some but I love having the freedom to pick and choose when I watch and what I watch.

My goal for 2018 and beyond is to make the website more accessible for the vision and hearing-impaired and for Disability Tek to be an onseller for all assistive technology via an e-commerce platform on the site.

My family has deep connections to Geelong and so naturally, I barrack for the Geelong Cats. My grandfather on my Mum’s side was both a player and coach of the Cats. I’m a Seinfeld fan, especially George Costanza. I recently turned 21 and celebrated it in Geelong with family and friends. It was a Harry Potter party.

I used to go to the Sun Theatre a lot but sadly have not been so much lately because I have been so busy with Disability Tek. Going to the Sun is one of the great joys of living in Yarraville and we are lucky to have it. The elevator in the theatre has made such a difference in making access to all theatres so much easier. The staff and people who own it are awesome and it is definitely one of Yarraville’s greatest treasures.

I like the Java Café as I can sit outside and Alfa in Alfa Seddon and Alfa Bakehouse Yarraville. They have delicious Nutella donuts. As a treat, my family love to get takeaway from Yim Yam Thai Laos Restaurants.

I don’t focus on my disability. I know how lucky I am even though I have some physical challenges. I understand I am so fortunate to have a supportive family and a great place to live. I am surrounded by friends and family who have helped me achieve so much already. As a result, I want to help others as there are people who are not as lucky as I am. I want to give back in some way and pay it forward and Disability Tek gives me that opportunity.